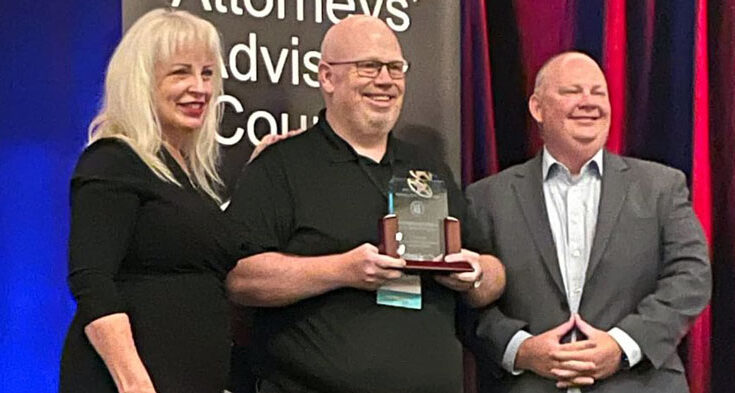 Image Courtesy Facebook: Graham County Deputy Attorney Stephen Lundell, center, is presented with the Juvenile Prosecutor of the Year Award on Friday. Next to Lundell, right, is Graham County Attorney L. Scott Bennett, who nominated Lundell for the award.

PHOENIX – Graham County Deputy Attorney Stephen Lundell has been named the 2022 State of Arizona Juvenile Prosecutor of the Year.

Lundell was presented with the award on Friday by the Arizona Prosecuting Attorney Advisory Council (APAAC) during its annual summer conference.

“Based on his superior skill, dedication, and commitment to justice, Stephen was selected as (its) juvenile prosecutor of the year,” Bennett wrote. “Stephen, it is a well-deserved honor.”

It was the second award for a Graham County employee for the week as Graham County Chief of Probation Josh Halverson was presented with the Administration of Justice Award by the Arizona State Supreme Court during the judicial conference on Wednesday.

“This prestigious honor is given to only one person each year in the entire state of Arizona to recognize an individual’s outstanding contribution to the court system,” Judge Peterson wrote. “Thank you Josh for your hard work and dedication to our county!”