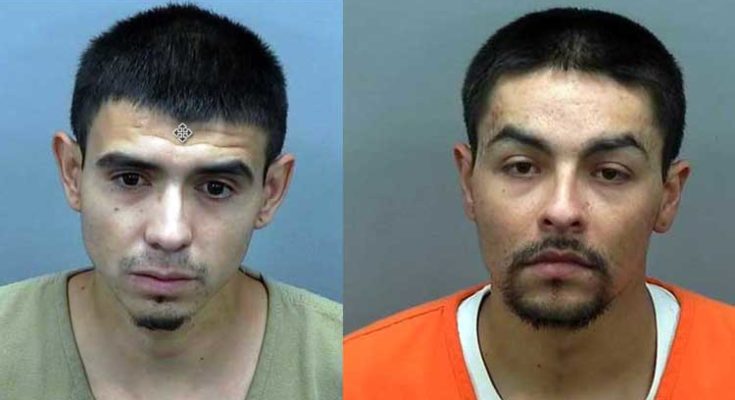 THATCHER – Two men found themselves under scrutiny by police after allegedly taking property from the Red Lamp Mobile Park at 3341 W. Main St. The close look at the men’s activities did not bode well for them.

On May 28, Phillip Jesse Gonzales Jr., 28, and Kedric Luis Mendez, 28, were arrested and booked into the Graham County Adult Detention Facility on charges of theft, possession of a dangerous drug, and possession of drug paraphernalia, with Gonzales being held on a warrant as well.

The arrest came after officers were informed that the men apparently removed a set of trailer stairs from a space in the Red Lamp. After gathering more information from the park’s maintenance worker, officers fanned out and soon located a white, 1999 Chevy truck driven by Mendez with trailer stairs in the bed.

After being pulled over, Mendez advised he believed he was allowed to take the stairs because a person in the front office told him so. After being informed nobody was in the front office, Mendez said it was actually another tenant who said it was fine to take because the town of Thatcher was purchasing the park and would be giving the stuff like the stairs away. The town of Thatcher is expected to close on its purchase of the 4.5-acre property for $1.2 million July 2. Mayor Bob Rivera has expressed his belief that most of the trailers left would have to be hauled away or demolished for scrap.

Officers also located drug paraphernalia under the passenger seat that was later claimed by Gonzales and some methamphetamine “shards” near the passenger door and a homemade pipe with apparent drug residue. Gonzales said the meth and pipe were not his because he was just a heroin user and didn’t use meth. Mendez said he hadn’t used meth in two weeks and that he was going to rehab to kick the habit. He denied ownership of the meth and pipe found in his truck and said he was just trying to help his friend get the stairs.

Officers also located a Chase Visa card, prepaid debit card, and an EBT card on Gonzales. He said the cards were on the stairs when he retrieved them, so he took them as well.

The men were then arrested and booked into the jail, and the truck was towed from the scene.