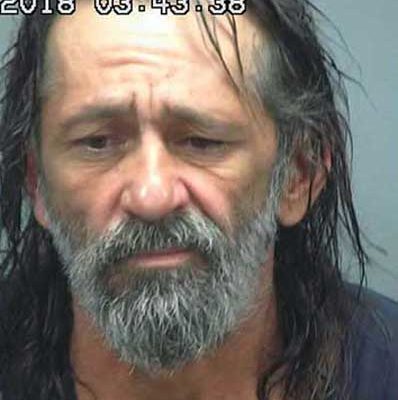 Contributed Photo/Courtesy GCSO: Travis Hancock was booked into the Graham County Adult Detention Facility on Saturday for aggravated assault after allegedly intentionally running over a person getting gas at JoBi’s Market.

GRAHAM COUNTY – An apparent case of drunken road rage sent one man to the hospital after being run over while at the gas pumps at JoBi’s Market on Saturday.

According to witnesses, a white truck with gray paint driven aggressively by Travis Shane Hancock, 48, skidded to a stop near another white truck that was getting gas and Hancock yelled at that truck’s occupant, identified as Thomas Reynolds, 46.

The witnesses advised Reynolds then retrieved some items from his truck and was standing south of the pumps when Hancock drove away. Hancock then made a U-turn and drove directly at Reynolds, striking him with the driver’s side headlight area. Reynolds then fell and his right leg was run over by the truck. The incident was caught on JoBi’s surveillance footage of the gas pumps.

At the scene, deputies located a pocket knife that Reynolds later advised was clipped to his pants when he was struck. He said when Hancock drove up to him and yelled, he feared a confrontation and retrieved a police baton and bear pepper spray from his truck. He advised those were the two items he was holding when struck. The officer later gathered up those items from the scene and placed them into evidence while releasing the pocket knife to a woman who arrived to take control of Reynolds’ vehicle.

Below is a video report using store surveillance footage of the incident. Viewer discretion is advised.

While Reynolds was being taken to Mt. Graham Regional Medical Center for treatment, Hancock’s truck – later identified as a 1994 GMC pickup – was seen northbound on U.S. Highway 191 traveling at a high rate of speed, according to a Sheriff’s Office report. Reynolds was later released that night from the hospital after being treated. However, Reynolds was taken back to the hospital Sunday, June 3, after complaining about pain and numbness in both of his legs and it was learned that both legs were broken. According to Reynolds’ son, the hospital had released him in an air cast for one leg but neglected to X-ray the other leg even though Reynolds had advised it was in pain. Reynolds’ son said he works at an assisted living facility in the Phoenix area and was taking his father with him back to Phoenix for surgery and additional treatment.

Another deputy performed a traffic stop on Hancock and learned he had a warrant for his arrest. Hancock also was already on probation for two separate incidents in which he pleaded guilty to assault in one and disorderly conduct and criminal damage/domestic violence in the other. Additionally, the deputy believed Hancock to be operating his truck under the influence of alcohol.

During interrogation, Hancock allegedly said Reynolds held a baton and a “black airhorn” in his face and threatened to shoot him. Reynolds later told a deputy that he did indeed have a handgun in his truck but said he never retrieved it or threatened Hancock.

The suspect also said Reynolds jumped in his way, which contradicted the witnesses version of events and what was seen on surveillance footage. He then described striking the victim as accidental.

After being taken to jail, Hancock began striking his own head against the jail door as well as kicking it. A warrant for Hancock’s blood was served and he submitted to having his blood taken for DUI testing purposes. While doing so, Hancock accused Reynolds of being a pedophile and said he was “glad he got the chance to smash Thomas with a truck”, according to the Sheriff’s Office report.