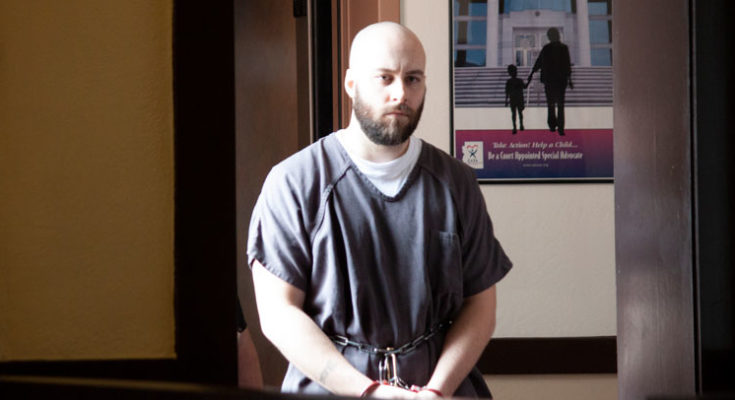 Jon Johnson Photo/Gila Herald: Christopher Decker arrives at court for his change of plea and sentencing hearing. Decker was sentenced to 2.5 years in prison for attempted luring of a minor for sexual exploitation.

SAFFORD – Christopher Antonio Decker thought he was coming to Safford to meet up with a 14-year-old girl for sex. Instead, what he found was a group of officers from an Arizona Department of Public Safety Internet Crimes Against Children operation and a 2.5-year sentence in prison.

Decker, 29, of Albuquerque, New Mexico, pleaded guilty Thursday to one amended count of attempted luring of a minor for sexual exploitation – a Class-4 felony and dangerous crime against children.

Decker was arrested Aug. 9, 2019, along with Billy Ray Bishop, 68, of Sierra Vista. Both men separately were ensnared in the DPS’ online operation in which operatives posed as 14-year-old girls on social networking sites. The men corresponded with the detectives and indicated their desire to have sex with them. The detectives then advised the men to travel to Safford to hook up. Bishop is still being adjudicated for his crimes. (See Gila Herald: Online sexual predators lured to Graham County under the guise of ‘hooking up’ with 14-year-old girls – Aug. 14, 2019)

In court on Thursday, Decker told visiting Greenlee County Superior Court Judge Monica L. Stauffer exactly what crime he had committed. Decker initially told Stauffer that he had texted with who he believed was an underage girl. When Judge Stauffer told him that was not a crime and asked specifically what he did, Decker acknowledged messaging the person he believed to be a 14-year-old girl with the intent to meet up and have sexual intercourse and that the messages made that abundantly clear.

According to the plea agreement, Judge Stauffer could have either sentenced Decker to a term of probation, which would include lifetime sexual offender terms or a stipulated term of 2.5 years in prison. The general sentencing structure for this crime is 1 year to 3.75 years.

It’s unusual that both the defense and prosecuting attorneys agree that prison would be the best option – especially when probation is on the table – but that is exactly what occurred Thursday.

Decker’s attorney, Kristin Curry, said while Decker showed remorse for his actions and that he is not likely to re-offend again, he felt that his best course of action would be to accept the prison sentence.

“At this point in time, he is asking to go ahead and go to the (Arizona) Department of Corrections for the 2.5-year term,” Curry said. “He believes just to be able to get the punishment upfront, so he can move on with his life (and) move back to New Mexico.”

Curry also advised that Decker’s intention was to go back to New Mexico and be with his family – including a son – as soon as possible.

Graham County Deputy Attorney Scott Adams – who stood in for Graham County Chief Deputy County Attorney L. Scott Bennett who prosecuted the case – advised the prosecution also requested the prison term but added that Decker be forced to register as a sex offender upon his release.

Judge Stauffer then sentenced Decker to the stipulated term of 2.5 years in prison as stated in the plea agreement with 216 days of credit served and with the availability of one day off for every seven served. Given all the parameters, Decker should be able to be released from prison by June 2021.