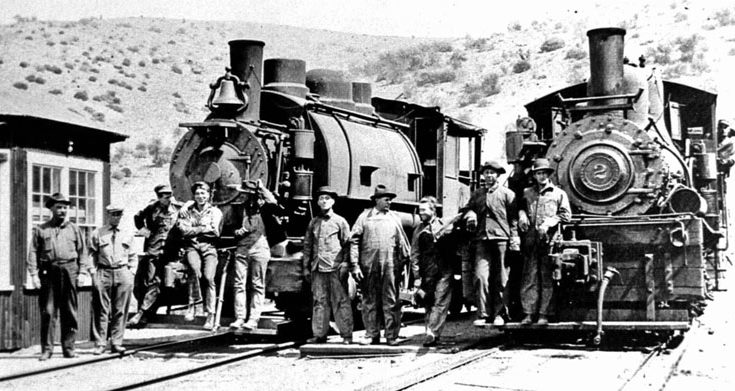 Contributed Photo: Old Dominion Days in Globe will be Sept. 12-15.

GLOBE – Echoes of pickaxes chinking against stone and the clatter of pasty buckets hastily stored in the shade of a mesquite tree float down through time. Excited chatter rides the wind from the turn of the 20th Century as a prospector uncovers a vein of copper sure to lead to the mother lode at the Old Dominion Mine in Globe.

The Gila County Historical Society will host Old Dominion Days on Sept. 12-15, to relive a time when pioneers struck out West to make their fortunes and survival depended on sheer grit. The celebration will feature a guided tour of the Old Dominion Mine, which, although still considered active, is now a mine-themed park complete with hiking trails lined with historic information placards, a zip-line, and a family park.

“This mine, this park, and these photos give us a glimpse of the golden age of Arizona and our area,” said Vernon Perry, president of the Gila County Historical Museum. “That is what Old Dominion Days is all about. We want people to get a taste of that exciting time of discovery and prosperity in our amazing community. “

“We wanted to bring a signature event to the community that celebrates our history and our community,” said Fernando Shipley, chairman of the Old Dominion Days board. “We chose our events so there is something fun for everyone to do.”

The Globe area is known for its ghosts – whether hovering around the mines, at the Old Gila County Jail or roaming the numerous historic buildings still standing on Broad Street. Standing silently beside the area’s many beautiful historical buildings and homes are the ghosts of buildings that housed the sick, educated the young and provided food for mine workers at the end of long shifts. One such building, the Old Dominion Library, built to honor and remember the deaths of three miners in the Interloper Shaft fire in 1906, was destroyed, ironically, by fire in 1981.

As early as 1864, prospectors began talking about the mineral richness of the area, and the first claim was filed but never worked. In 1873, more claims were filed for the Globe Ledge northeast and southwest of the Big Johnny Gulch area. As the silver ore was being taken to Florence for assay in 1875, men on the pack train discovered a much richer vein that they called the Silver King. The first load of silver from Globe Ledge netted the miners $120.95. The silver from the Silver King assayed more than $4,300 per ton and caused a rush to the Pinal Mountain Country as it was known then, according to Clara Woody (The Old Dominion Mine – Globe, Arizona).

The only route into the area at that time was a wagon trail from the east, but despite this, men brought their wives and children and lived out of their wagons until housing could be built. All food and mining supplies were brought in by wagon freight, a practice that continued for nearly 20 years despite the expense and danger associated with it. The steepness of the road to the mine was difficult for oxen teams to go up and even more difficult – and treacherous – for them to come down with loads of copper.

By 1880, the silver had virtually petered out, and copper was the mineral to mine. In 1882, the Old Dominion Copper Company of Baltimore purchased the Old Globe Copper Company holdings and moved two 30-ton water jacket furnaces to smelt ore. For the next 50 years, the financial health of the Old Dominion was the barometer of Globe’s economy, according to Wilbur A. Haak (The Old Dominion Mine, 1998).

For about 20 years, the mine experienced a series of highs and lows related to the price of copper and the cost of mining it. One of the most crippling was the cost of the coke for the furnaces, some of which was transported all the way from Cardiff, Wales. Water was the other problem. Not only was much of the ore underwater, there were several devastating floods. The most notable was in 1904 during which six people drowned, several buildings were damaged and demolished and a section of the railroad was washed out.

The first miner protest due to a workforce and wage reduction occurred in 1884. In subsequent strikes in 1896 and 1917, Cornish men called Cousin Jacks initiated collective bargaining – they became one of the most powerful unions in Arizona – and made their appearance on the pages of Globe’s history. Members of this union brought with them generations of knowledge and experience mining gold and copper. They also brought the Cornish pasty, which is meat and potatoes baked in a flaky crust, which was commonly packed in lunch pails and became – and still is – a local favorite.

Martial law was declared during the 1917 strike due to escalating violence, and the 17th Cavalry Regiment was called in to break it up. This was the same regiment that was on the Mexican border during the Pancho Villa affair, and it remained in Globe for more than a year.

After five years of construction, the Gila Valley, Globe & Northern Railway from the Southern Pacific line in Bowie was brought into Globe in 1898, and this lowered transportation costs for the mine.

Just after the turn of the 20th century was a time of exploration and prosperity for Globe, which was then the fourth largest city in the state of Arizona. Old Dominion Mine was modernized and expanded, and many of the historical homes and buildings that still stand were built between the years of 1904-1910.

Unfortunately, flooding continued to be a problem for the mine, and the grade rate was dropped from 4.16 percent copper in 1929 to 2.27 percent in 1930. The mine closed in 1931, but it had produced 800 million pounds of copper and a way of life – that continues to this day – for thousands of miners and their families. The mine is now owned by BHP Billiton.

The When and Where of Old Dominion Days

Old Dominion Days in Globe is a four-day celebration Sept. 12-15 of the golden age of the state of Arizona.

All events are at the Gila Historical Museum, 1330 N. Broad St., Globe

11:30 a.m. – History Presentation – The Old Dominion Mine Then & Now by Vernon Perry

6 p.m. – Music at the Museum – Mining and Fold Music by Steve Holmquist

All events are at the Gila Historical Museum, 1330 N. Broad St., Globe

All events are at the Gila Historical Museum, 1330 N. Broad St., Globe, unless otherwise indicated

All events are at the Gila Historical Museum, 1330 N. Broad St., Globe, unless otherwise indicated