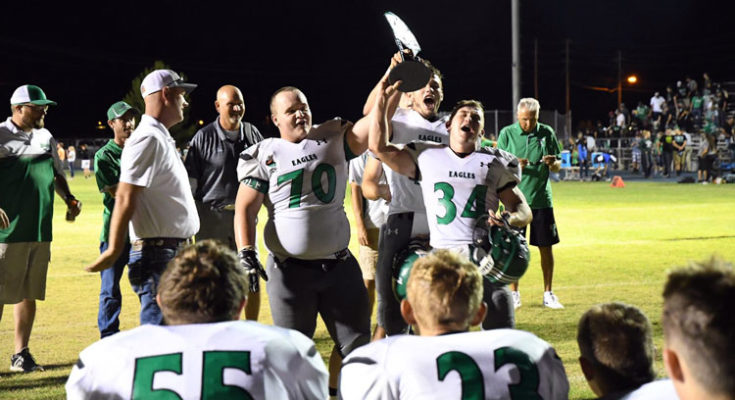 Photo By Stan Bonifacio: Quinten Mack, left, and Quinton Turley hoist the rivalry trophy after the Eagles beat the Bulldogs, 28-20.

SAFFORD – One team left the field at Safford High School on Friday night with an 0-3 record and the other left 3-0, but an observer of the game would not have known which was which until it was all over.

The Safford Bulldogs (0-3) tied or led the heavily-favored two-time reigning 2A State Champion Thatcher Eagles (3-0) for three quarters, but the game is four quarters long and the Eagles work helped them pull it out in another thriller of the biggest rivalry game of the season, 28-20.

“Our kids played very, very hard and went toe to toe with the two-time defending state champions in 2A football,” said Safford head coach Eric Hjalmarson. “Nobody thought we had any business playing with them.”

The Bulldogs had the business and then some. After a good opening drive by Thatcher suffered a setback in the red zone due to a penalty, Safford’s defense held and stopped Eagles quarterback Jake Kortsen on a fourth down and goal from the 10.

Three plays later, Safford’s big throwing game was on display as Mason Duros hit his fullback Robert White, who raced 58 yards to the 27. Thatcher’s Riley Morris ran White down from behind to save the touchdown.

At the start of the second quarter, Safford got on the board when C.J. Scrivner went up and over for a 1-yard TD dive. The extra point was good and the Bulldogs were up 7-0.

After forcing Thatcher into a three-and-out, Safford’s aerial attack was showcased again and the Bulldogs were soon knocking on the Eagles’ end zone again.

The Eagles’ defense stepped up, however, and Bretton Dodge knocked out a touchdown pass to Nathan Wilms.

Facing fourth down and 10 from the 25, Safford went for it and Duros connected on a beautiful pass to Scrivner in the back of the end zone and the underdogs were up 14-0.

Thatcher clawed its way back into the game by sticking to its plan and began to wear down the Bulldogs with its relentless run attack and quick-hit offense.

Two plays later, Dodge stretched out for the TD, and Thatcher got on the board. Safford still led, however, and the teams went into the locker room at halftime with the Bulldogs up, 14-7.

“We felt like defensively we had made some mistakes that we shouldn’t have made, and so we felt like in pretty good shape that we would be able to come out and put some drives together,” said Thatcher head coach Ramon Morales. “A lot of credit to Safford. They’ve got a good ball team. They just have to keep plugging away.”

Thatcher’s defense stepped it up in the third quarter by forcing Safford into a three-and-out on its first offensive series. On the punt play, Motes came free around the right side and blocked the punt, giving the ball to Thatcher in great field position at the Bulldog’s 30-yard line.

Dodge then scored his and Thatcher’s second touchdown of the night with a 15-yard scamper around the left side to tie the game up at 14 apiece.

The Bulldog aerial attack came right back, however, and Duros hooked up with Justin Torrio, who made a beautiful catch along the sideline. Torrio then snagged a pass over his shoulder from Duros and took it 29 yards to pay dirt. The extra point attempt was short, but Safford had regained the lead, 20-14.

“It wasn’t like we were caught by surprise,” Morales said. “We just didn’t execute and they did and they made us pay. That’s what a good football team will do.”

With momentum on their side, the Bulldogs’ defense knocked the Eagles backward and forced a punt. On one of the few miscues for the Bulldogs’ offense on the night, Scrivner mishandled a handoff and Conner Russell beat Duros to the spot for the recovery for Thatcher.

Thatcher couldn’t capitalize on the turnover, however, as the Safford defense held again and the Bulldogs went into the fourth quarter protecting their lead. But leads can be tenuous.

After a Safford punt, Kortsen kept the ball on an option play and went 70 yards untouched around the left side for the TD. The extra point was good and Thatcher had its first lead of the night, 21-20.

Safford then turned the ball over on downs and the Eagles’ burly lineman continued to open holes for its stable of running backs as Thatcher methodically moved the ball down the field.

Riley Morris had a big 25-yard gain on third down and 5 to extend the drive, and Kortsen had another quarterback keeper for 17 yards down to the 7 to set up the Eagles with first and goal.

Two plays later, Quinton Turley took it in from 2-yards out to pad the Eagles lead to 28-20.

“That’s kind of our M.O.,” Morales said. “We feel like we can wear people down. Our line does an excellent job and we’ve got big, strong kids and we use that to our advantage.”

The Bulldogs weren’t out yet, however, and Duros began leading a comeback. On a third and long, however, the Eagles’ defense held and after not finding anyone open downfield Duros was sacked and injured his ankle on the play. With Duros out, Safford failed on its fourth down attempt and the Eagles ran out the clock the rest of the way to preserve the victory. The extent of Duros’ injury was not immediately known, but he is probable for next week’s game.

“You know, Thatcher, they’re good,” Hjalmarson said. “But I hope people realize we’re a good football team too. I’m very, very proud of our kids. I’m very proud of my coaching staff, the community, the band, the cheerleaders. This place is a great place, we just gotta win some games.” (sic)

After the victory, Kortsen expressed his pleasure with the outcome.

“I didn’t get to play in the game last year, but it’s a huge game,” Kortsen said. “A lot of emotion goes into it, and this win feels really good. I’m glad to be here and be for Thatcher.”

A couple of plays the other way and Safford could easily have been 2-1 if not 3-0. As it is, the Bulldogs will look to notch their first win of the season on the road at Show Low (1-3), which bounced back from the drubbing it took against Thatcher to demolish American Leadership Academy-Ironwood, 40-6. The Safford game will take place at Show Low on Friday, Sept. 14, starting at 7 p.m.

Thatcher has six games left this season and could likely run the table with only half of those being against quality opponents. The Eagles continue their quest for a three-peat Friday, Sept. 14, as they host the Benson Bobcats (2-1), who are coming off a big 54-0 beating of the Santa Rita Eagles. The Bobcats, who lost Aug. 31 to Morenci, 21-6, are aware Thatcher is an eagle of a different color, however, and expect a much better team than they faced this week.