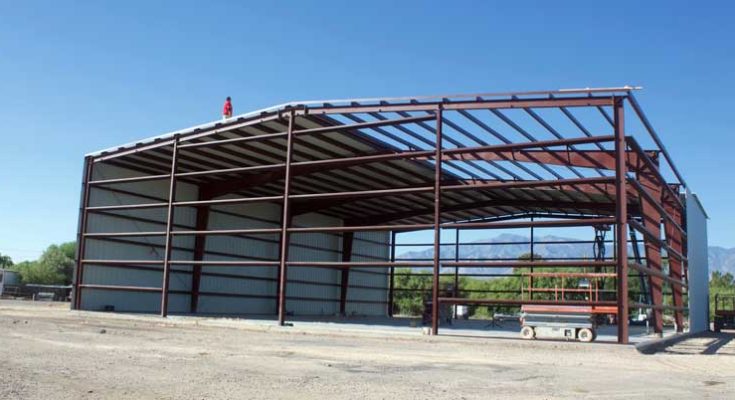 PIMA – Transforming eyesores into something to be proud of. That has been the focus of the new leadership in the town of Pima and their efforts are easy to see.

In April, Yentsch’s Concrete poured 200 yards of concrete to create an 8,000-square-foot slab for Pima’s new commercial corridor project, and now, at the beginning of May, a behemoth of a building is emerging thanks to the construction prowess of Ward Brothers Enterprise LLC.

On Thursday, Pima Mayor C.B. Fletcher and Pima Town Manager Sean Lewis stopped by the worksite with some breakfast burros from El Mesquite Taqueria for the Ward Brothers workers who were assembling the building. The crew has already placed the support frame and is busily attaching siding and roofing.

“I think it’s marvelous,” Fletcher said. “I think it’s very exciting . . . This is going to be a beautiful building when it’s finished.”

“They (Ward Brothers) do excellent work. What I like about it is everybody in town can’t believe how quickly it’s gone up . . . They’re a really good company.”

“The right people are doing it,” Lewis said. “The good thing about the Wards is they show up on time and they work a full day. In this industry, sometimes that can be hard to find. These guys do great work, and I couldn’t be happier that they got the bid.”

After the metal building is complete, the inside will be insulated and framed out to have two stories.

The building will serve as the new home for Optimal Health Systems (OHS) and is being custom built to meet their expanding needs. The town purchased the old Graco car lot property after the Pima Town Council unanimously voted to do so at its Oct. 3, 2017 meeting with the caveat that OHS sign a long-term (10-year) lease for the space. OHS will put on its finishing touches to the building, including an attractive facade, landscaping, and paint.

According to owner Doug Grant, OHS is a whole-food nutrition company that has operated in Pima since 2003. It services a variety of people, including athletes, doctors, and people just wanting to improve their health.

“We’ve been needing to build a larger facility for years now and have been looking where we could do it and stay in Pima,” Grant said in October 2017.

The town purchased the land for $115,000 and the metal building shell, which will arrive in roughly two weeks and will begin to be constructed, cost $50,000. With electric, plumbing and other finishing costs, the town’s total investment is about $215,000, with about $136,350 coming out of pocket thanks to it selling land across from the cemetery for $78,650.

Lewis previously said he believed the town would recoup its out-of-pocket costs within four years and total investment within six years through the lease of the main building alone. Additionally, there is space to add three offices available for lease/rent that will be built if renters are found.