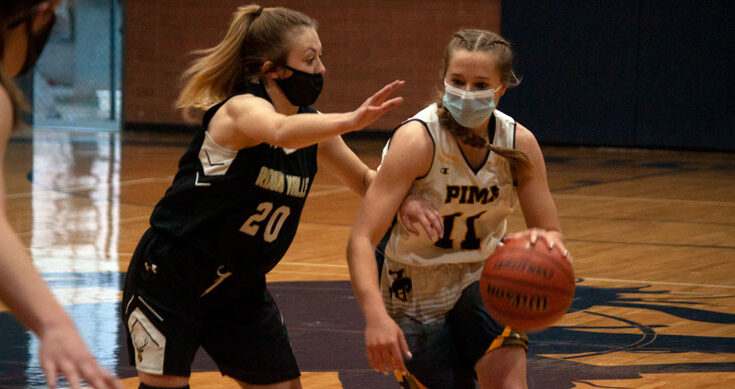 PIMA – The Pima girls basketball team is ranked number one in the state in 2A, and they showed their prowess with a 57-34 victory over the Round Valley Elks on Tuesday.

“That was a heck of a game for us offensively,” said head coach Roy Corona. “Defensively, we played awesome also, but we finally hit some shots tonight . . . I think we’re good enough to beat anyone.”

Pima (3-0 region, 8-0 overall) took sole possession of the top spot in the 2A East Region with the victory. The Roughriders have beaten their opponents this year by 20 points or more in every contest except for Fort Thomas, which Pima won by 16.

On Tuesday, Saydee Allred came out of the gate on fire as she outscored Round Valley by herself in the first quarter, hitting 14 of her 16 points on the night. Allred scored a variety of ways, with short jumpers off baseline drives to the bucket and by nailing two 3-pointers.

Allred was magnanimous when discussing her first quarter explosion.

“My team screened for me and got me open,” she said.

When the dust settled after the first, Pima had already doubled up Round Valley, 19-8.

Pima held Round Valley to single-digit scoring in each quarter and was up 32-17 at the half.

“I think we’re working really well together,” Allred said. “It feels good to win against a great team like that.”

In the second half, Ashlie Sherwood scored 14 of her game-high 17 points on the night with some assistance from her twin sister, Aubrie Sherwood, who screened for her on a couple of designed inbounds plays. As the play developed, Ashlie ran to the corner past the screen and calmly sunk two 3-pointers in the third quarter.

For the first four minutes of the fourth quarter, Pima initiated a full-court press defense that caused fits for Round Valley, which turned the ball over multiple times leading to layup buckets for the Roughriders.

“They were having trouble beating our press in the first half, so I was like ‘if they score we’re in press, they can’t handle it; we can get some steals,’” Corona said.

The strategy worked to perfection, giving Pima a 16-0 run in the fourth quarter as the starters didn’t allow Round Valley to score. The only time the Elks managed to put the ball in the basket in the fourth was after Pima had cleared its bench with just over 2 minutes left in the game, which ended 57-28.

Ashlyn Chlarson was her normal steady self and gathered multiple rebounds while putting in 11 points on the night. Aubrie Sherwood went for 5, Jaci McClain and Nevaeh Grant each added 3, and Sam Pippo had 2 to finish the scoring.

Round Valley was led by Karli Haws with 11, followed by Shiloh McCall with 8, Emma Young with 7, Kayla Logan with 4, and Ryli Haws and Taelynn Walker each had 2 points.

Pima will host the first game of a doubleheader against St. Johns on Wednesday, starting at 5:30 p.m. The Roughriders will then head northward for a rubber match against the Redskins on Friday, Feb. 12, starting at 6 p.m. The team will stay up north overnight and then face the Blue Ridge Yellowjackets on Saturday, Feb. 13, with a 2:30 p.m. start time.