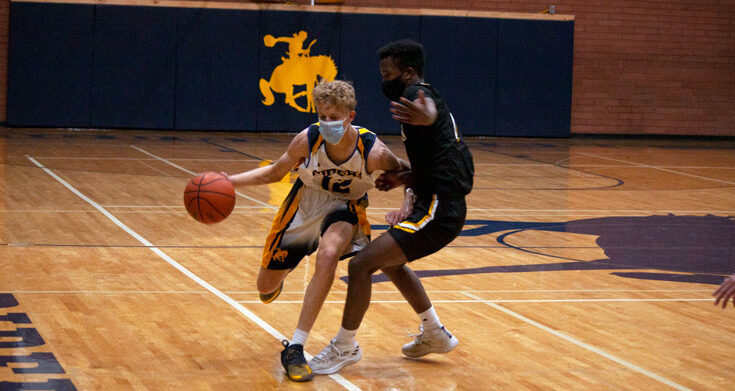 Jon Johnson Photo/Gila Herald: Grant Ashby drives on his opponent. The Pima Roughriders blew out the Round Valley Elks on Tuesday, 65-38.

PIMA – The Pima Roughriders (4-0 region, 7-1 overall) sit alone atop the 2A East Region. Pima showed its dominance over the Round Valley Elks on Tuesday with a 65-38 victory.

“I was extremely happy at times and kind of irritated at other times, but, overall, I think we played really hard, and we played good defense,” said Pima head coach Cliff Thompson.

Defense was indeed the dominant theme again for the Roughriders, which only allowed 4 points in the first quarter of play and 11 for the first half.

Conversely, the Roughriders’ Kaleb Blair came out on fire and hit his first two of four 3-pointers in the first half on his way scoring 14 on the night.

Point guard Tim Salyer again handled the rock efficiently with only a few turnovers while adding 14 points of his own.

Pima utilized an 8-0 run in the first quarter and a 9-0 run in the second to enter halftime up 27-11. However, sharpshooter Kenton Skiba turned an ankle and did not return for the second half. Thompson said they were cautious with Skiba and held him out because he would be needed more in games up north on Friday and Saturday than in the blowout victory.

The Roughriders were in the bonus early as the fouls skewed lopsided toward Round Valley and Pima made the most of their trips to the charity stripe.

“I think it’s because we were aggressive offensively instead of sitting back and taking jumpers,” Thompson said. “We wanted to be aggressive and go to the basket.”

The game saw the continued emergence of Pima’s sophomores with the first start for Grant Ashby (4 points) and a big night for Seth Russell, who went 9-11 from the free-throw line on his way to a game-high 15 points. Russell also had the play of the night in the fourth quarter when he followed up a fast-break layup miss by Coy Miller by snagging the rebound with one hand and dunking it. The play caused the crowd to erupt and made announcers gawk.

After a huge 24-point third quarter gave the Roughriders a 51-23 lead, Pima went deep into its bench. Sophomore Garrett Curtis made the most of his playing time and hit for 8 points all in the final quarter. Steady center Jacob Brimhall also contributed 8 points in the game, followed by Grant Ashby with 4 and Reggie Stewart with 2.

“We were able to get some guys off the bench and they had the opportunity to get after it, make some mistakes and dunk the basketball – things like that,” Thompson said. “I’m really happy with the way we played. We’re always trying to get better though, and there’s things we saw that we need to work on.”

Kryan Clark led the Elks with 15 points, followed by Treyson Merrill with 8, Owen Young with 5, Seth Wiltbank and Makoi Funaki with 4 each, and Gavin Latham with 2.

Pima will next travel to St Johns for its rubber match with the Redskins on Friday, Feb. 12, starting at 7:30 p.m. The Roughriders narrowly defeated the Redskins on Feb. 6 by the score of 51-45. Pima will spend the night up north and then take on the Lakeside Blue Ridge Yellowjackets on Saturday, Feb. 13, starting at 4 p.m. They will also now have the services of Safford transfer senior Trett Wiltbank, who sat out eight games due to transfer rules.