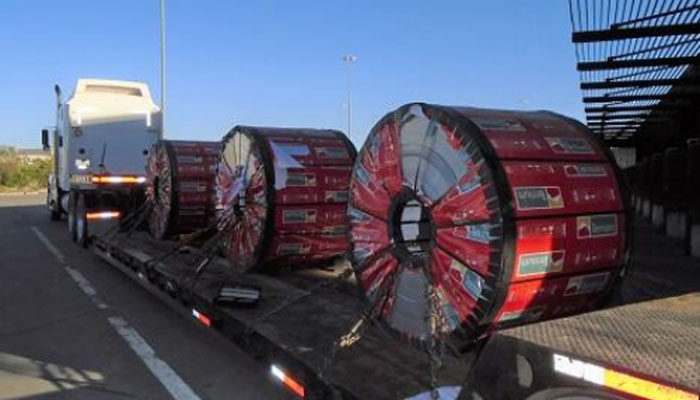 Contributed Photo/Courtesy U.S. Customs and Border Protection: A CBP canine alerted officers to a shipment of sheet metal, which turned out to contain 4,100 pounds of marijuana worth $2.1 million.

NOGALES – U.S. Customs and Border Protection, Office of Field Operations, officers at the Port of Nogales seized nearly $2.1 million in marijuana over the weekend.

Officers referred a tractor trailer being driven by a 45-year-old Mexican national when he attempted to enter the United States through the Mariposa commercial facility, Saturday afternoon. A CBP narcotics detection canine alerted officers to nearly 600 bundles of marijuana concealed within a shipment of rolled sheet metal. The drugs are identified as more than 4,100 pounds of marijuana, with a value of nearly $2.1 million.

Officers seized the tractor trailer and the drugs. The driver was arrested and turned over to U.S. Immigration and Customs Enforcement’s Homeland Security Investigations pending further investigation.