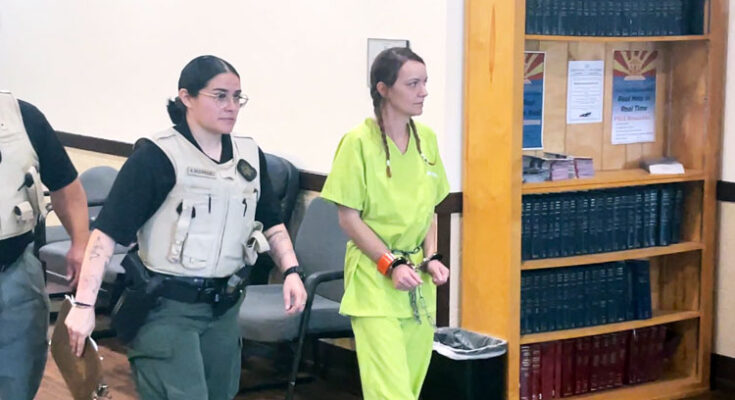 Jon Johnson File Photo/Gila Herald: Amber Langley is led to court in August 2022. Langley was in court on Tuesday for a pretrial conference regarding charges of murder and fraud involving the homicide of her 14-year-old daughter, Cadance Langley, who was found on Oct. 26, 2020.

SAFFORD – A trial date is yet to be set in the case of a mother accused of murdering her daughter and covering it up while collecting government benefits.

Amber Rae Langley, 38, appeared in Graham County Superior Court with her attorney, Dennis McCarthy, on Tuesday morning for a pre-trial conference. Langley is charged with one count of first-degree murder as well as charges of fraudulent schemes and artifices.

The charges regard the murder and disposal of Langley’s 14-year-old daughter, Cadance Langley, who was found stuffed in an animal float box south of Safford, Arizona, on Oct. 26, 2020.

An autopsy showed Cadance was killed by a gunshot wound to her head, but she went unidentified for more than a year-and-a-half until familial DNA linked her to her mother.

During a pre-trial conference on Tuesday, Langley’s attorney Dennis McCarthy said they were still getting evidence from the prosecution in the Discovery phase of the litigation and requested a waiver of time to have another pretrial conference before a trial date was set.

“There’s quite a bit out there,” McCarthy said of the Discovery process. “We’re getting it piece by piece but we’re moving along. Mr. Perkins and I and Mr. Bennett will be meeting tomorrow to discuss additional discovery, so I think it’s premature to set our trial date at this point.”

Graham County Chief Deputy County Attorney C. Alan Perkins is prosecuting the case and was in agreement with McCarthy. He said while he believed most of the disclosure of the “real substantive stuff” has been made and the defense has been disclosed of more “than 1,000 pages” but there are roughly “20,000 pages of game cam stuff that is maybe 9-plus percent irrelevant but we want to commit full disclosure.”