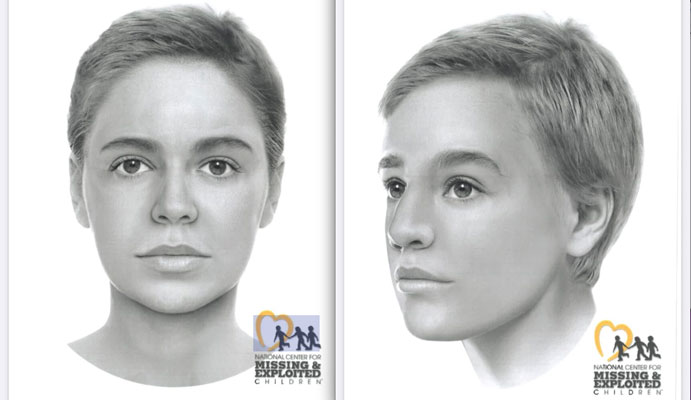 Composite of Cadance Langley by the National Center for Missing and Exploited Children: While composite images like these failed to identify Cadance Langley, familial DNA was successful in not only identifying her but her alleged killer as well.

Two years ago, on Oct. 26, 2020, the body of a slain young girl was found stuffed in an animal water float box south of Safford, Arizona.

The girl was wrapped in a blanket and covered in a plastic bag. Toys, including My Little Pony, Barbie dolls, a bracelet, and a stuffed animal, were also found in the float box. However, investigators found more ominous evidence a short distance away as they collected spent ammunition shells. They would soon learn the body they found was a young girl who had been executed by a gunshot to her head.

Her identity would remain unknown for more than a year, however, until familial DNA identified not only the victim but her alleged killer.

The victim was identified as Cadance Langely, a 14-year-old non-verbal autistic female. Her alleged killer is her own mother, Amber Rae (Jones) Langley, 38.

After Cadance was found, investigators immediately attempted to identify her. But with only the toys (which weren’t initially released to the public) and her clothing, which included a hooded sweatshirt with skulls on it, a black “witches” costume, and a white blanket with red/pink markings on it, there was little else to advance the investigation. She matched no known missing children, and nobody locally had reported any missing child matching her description.

The Sheriff’s Office worked with local media, the National Center For Missing and Exploited Children, and other organizations and released a facial composite approximation, but none of the tips the agency received helped to identify Cadance.

Situated just north of E. Artesia Ranch Road sits the Saint Paisius Monastery at 10250 Sky Blue Rd. And on the gate of the monastery sits a game camera roughly a tenth of a mile east of the intersection of Artesia Road and Stockton Road on the north side of the Artesia Road alignment. They also have a tree camera roughly 10 to 20 feet north of the gate.

Cadance’s body was found in a float box near some corrals down Artesia Road from the monastery.

Investigators poured through months of images from the game camera, which showed traffic along Artesia Road, but still could not identify Cadance or how she got to where she was found.

The final diagnosis from the Pima County Office of the Medical Examiner states Cadance Langley was killed by a gunshot wound to her head.

However, the autopsy only showed the victim as being between 13 to 17 years old, and Caucasian.

After hitting a dead end, an investigator was contacted in August or September 2021 by a representative from Astrea Forensics Laboratory, who offered their company’s services to test for the victim’s DNA at no cost to the county. After assurances from the Pima County Office of the Medical Examiner investigators approved the medical examiner providing a hair from the victim’s head and one of her teeth as requested by Astrea Forensics. The items were sent to the forensic lab on Sept. 17, 2021.

In February 2022, a representative from Innovative Forensic Investigations informed the Sheriff’s Office that they had received a strong lead on the victim’s identity as 14-year-old Cadance Langley. The company advised it had submitted the DNA profile Astrea Forensic had given them to a company called GEDmatch and located the young girl based on genealogical matches from both the father and the mother’s side of the ancestry. GEDmatch is an online service that compares DNA data files from different testing companies to assist with genealogy research.

The company not only identified the mother of the victim as Amber Rae (Jones) Langley, but it also showed she had three other children (two teenagers, and one under the age of 10). The father was identified as well and was shown to be living in Tennessee. He is estranged from Amber Langley as there was no official divorce and has been apart from Amber and her children for years.

Further police investigation showed Amber Langley was living in Safford and her three other children were enrolled in school locally. However, there was no record of Cadance having been enrolled in any local school, including the Safford School District which has an in-house special education program, or Dan Hinton School in Pima, which has special education students from throughout Graham County.

Police also matched Cadance’s father from a cigarette butt he tossed during a traffic stop. The FBI utilized a bone from Cadance provided by the Pima County Office of the Medical Examiner for testing purposes.

Just 20 days before Cadance’s decomposing body was found in the float box, a Safford officer responded to a juvenile problem call involving Cadance.

According to a Safford Police report, the officer responded to an apartment after a juvenile started a fire inside an ice chest next to the front door.

The officer was unable to communicate with Cadance, according to the report, and Amber Langley told the officer that Cadance was going into a group home that weekend because of behavior like that and Amber assured the officer that she would watch Cadance more carefully. That was the last documented sighting of Cadance by law enforcement until they found her body.

Once police learned the identity of Cadance and her mother, Amber Langley, they were curious as to why she hadn’t reported her daughter missing. In looking at Social Security Administration (SSA) records, it became evident that Amber was still collecting SSI benefits for Cadance from when they had lived in Oregon. According to SSA records, Amber Langley was contacted on July 8, 2020, regarding her request for benefit eligibility but she hung up. The SSA then made a decision to suspend benefits due to non-cooperation on Oct. 30, 2020 – four days after Cadance’s decomposing body was found – but the suspension wasn’t implemented due to rules not allowing suspensions during the COVID-19 pandemic.

Financial documents not only showed Amber Langley received about $1,500 monthly from the Veterans Administration for her military service but that she also received a total of $4,763.97 worth of SSI payments for Cadance beginning with the month after she was found deceased.

An FBI agent then called Amber Langley on June 7, 2022 – 19 months after her body was discovered – and acted as a Social Security representative and left a voicemail advising her to call him back regarding the termination of Social Security benefits. The agent received a call back shortly thereafter from Amber Langley, and the agent advised he needed to perform a “redetermination” with her regarding Cadance’s benefits.

Back to the Monastery

After learning of Amber Langley’s identity and relation to the victim, Cadance, investigators compared vehicles Amber Langley drove and those in the footage from the game camera at the Saint Paisius Monastery and they soon found a match.

Amber Langley was then contacted in person by an FBI agent and Graham County investigator and was interviewed at her residence on Aug. 24, 2022. During the interview, she continued to behave as if Cadance was alive. However, when asked if she could show physical evidence of Cadance, Amber allegedly asked if her son could verify her existence.

The FBI agent then asked Amber if she had ever driven her Tahoe past a monastery in Artesia. She was shown pictures from the game camera reportedly of her Tahoe and she said she had gone shooting in the area before.

During questioning, Amber told the FBI agent and GCSO investigator that she had been contacting a behavioral place for Cadance in Tucson in July or August 2022 but said they wouldn’t accept her because her behavior was too much for them to handle.

Amber then told them she remembered driving with Cadance in the Tahoe to Tucson and on the way back listening to music, just the two of them in the SUV. Then she made the decision to pull off onto the dirt road toward the stables.

Amber knew the area around the stables well, she had been target-shooting there before. This time, the target was to be her own daughter.

When the investigators asked Amber how she got Cadance to stop screaming, Amber reportedly said she retrieved a handgun from the SUV and then “put her to sleep” in her words to the investigators. When questioned if she had gotten Cadance to go to sleep by shooting her with the handgun, Amber allegedly non-verbally affirmed. She also advised she still had the murder weapon in storage and it was later seized by police as evidence to be compared to a bullet fragment lifted from Cadance’s skull during her autopsy.

Amber justified her action by saying she wanted Cadance to be safe and happy and that she worried about her safety moving forward in life being autistic and non-verbal. Amber said she herself was a victim of sexual assault multiple times, including being raped at ages 13 and 18, molested by a doctor while in the military, and raped again at age 24. Worried that Cadance would not be able to look out for herself or speak out if harmed, Amber said she did the only thing she thought she could do to help her little girl and “put Cadance to sleep” and that she did it out there because  she wanted Cadance to be “peaceful and happy.”

The investigators then asked what Amber did after Cadance “went to sleep” and asked if the items Cadance was found with, including the blanket, plastic bag, and toys were already in the vehicle. Amber allegedly said the blankets were in the SUV but shook her head up and down when asked if she had to go back to the area to wrap up Cadance. She later repeated that she went back to the area “a few times” in the Tahoe.

Upon her return home, Amber said she told the rest of her family that Cadance had been placed in a group home in Tucson and nobody had attempted to contact or see Cadance in the time since then.

Amber Langley was then arrested on Aug. 24 on charges of fraudulent schemes artifices and theft regarding the receiving of benefits from the SSA after Cadance had died. An additional charge of first-degree murder was filed against Amber Langley on Sept. 1, 2022, and she was appointed attorney Dennis McCarthy for her defense on both the murder case and theft and fraud charges.

She is currently incarcerated in the Graham County Adult Detention Facility awaiting adjudication of her cases.