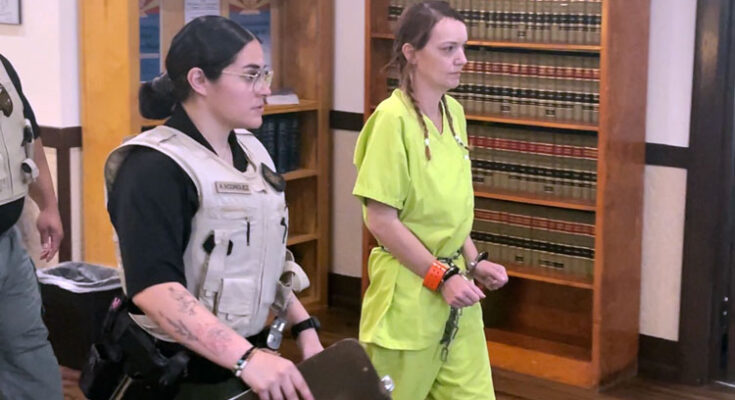 Jon Johnson Photo/Gila Herald: Amber Langley is led to the Justice of the Peace courtroom for a preliminary hearing on fraud charges last Wednesday. Murder charges in the killing of her 14-year-old daughter, Cadance, were filed against her on Sept. 1.

GRAHAM COUNTY – The mother of a 14-year-old autistic child who was fatally shot and disposed of in the desert southeast of Safford has been charged with her murder.

Amber Langley, 38, has been given a single charge of first-degree murder. She is being held on a $2 million bond. She is being represented by attorney Dennis McCarthy, who was also previously appointed to represent Langley on theft and fraud charges.

Amber Langley is accused of shooting her daughter, Cadance Langley, 14, in the back of her head execution-style and then dumping the body in a bag partially submerged in water in a box near the corrals off Artesia Road roughly eight miles east of Highway 191. Cadence was found by quail hunters on Oct. 26, 2020, but wasn’t able to be identified until a thorough DNA and genealogical investigation was completed.

Amber Langley was arrested on Aug. 24 on related charges of theft and fraudulent schemes and artifices. A DNA profile from Cadance created by a laboratory in California and the FBI was used by Innovated Forensic Investigations, which used the familial DNA profile to perform a genealogical investigation. That investigation indicated Cadance was the daughter of Amber Langley.

Amber was initially arrested on the fraud and theft charges because she continued to accept government assistance for Cadance from after her body was found until just recently. According to court testimony from Graham County Sgt. Mark Smith, Amber received a total of more than $4,700 in federal assistance for Cadance after her body was found deceased and that she had been receiving regular payments until she was taken into custody.

On June 7, 2022, an FBI agent performed a “redetermination interview” phone call with Amber in which Amber claimed Cadance was alive and well and that they were living with Amber’s mother in Springfield, Oregon, while she was actually living in Graham County.

As far as motive, investigators believe Amber simply couldn’t take dealing with an autistic daughter anymore and felt her only way out was to murder her.

Editor’s Note: This article was updated to correct the spelling of Cadance Langely’s name from “Cadence.”