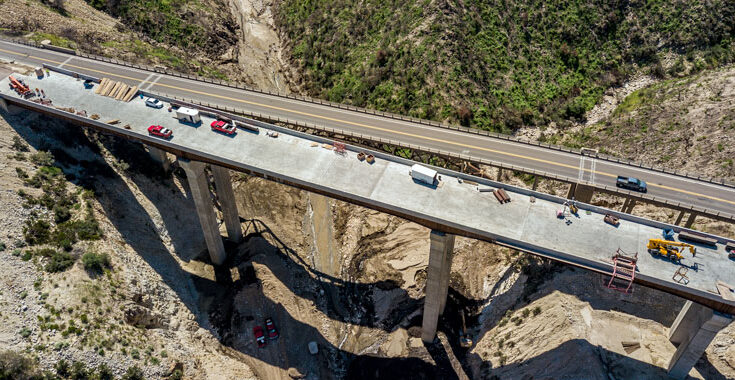 MIAMI – A new U.S. Highway 60 bridge over Pinto Creek opened to traffic Friday, Sept. 17, replacing a 72-year-old structure on the only route between Superior and the Globe-Miami area.

The Arizona Department of Transportation began the $22.7 million bridge replacement project 23 months ago, constructing the new bridge just feet away from traffic that continued using the existing structure. Then on the night of Sunday, Sept. 12, work crews closed U.S. Highway 60 between Superior and Miami for an around-the-clock operation to realign the roadway to the new bridge.

The 695.5-foot-long bridge opened to the public about noon Friday. While both bridges were designed for two lanes of traffic, the new structure also features 8-foot-wide shoulders and can handle heavier loads.

“U.S. (Highway) 60 is a critical route for passenger vehicles and commercial traffic, including heavy loads from mines in the area,” said ADOT Southeast District Engineer Bill Harmon. “By completing this new bridge at Pinto Creek, we’re making sure the highway will remain reliable and safe for decades to come.”

The bridge is expected to handle roughly 7,200 vehicles a day.

While the largest milestone of the project is complete, drivers should expect periodic lane restrictions and delays in the area through the rest of 2021. Crews will work to restore the project site to its natural state over the next several months, with work beginning shortly to remove the existing bridge.

The old bridge, which opened in 1949 with an estimated lifespan of 50 years, remained safe for traffic but had reached the end of its useful life. As noted on plaques at each end of the structure, the American Institute of Steel Construction bestowed an annual award of merit for 1949’s Most Beautiful Steel Bridge, Class II. Days after closing the old bridge, crews removed the plaques so they can be donated to local historical societies.

More information about the project is available at azdot.gov/PintoCreekBridge.