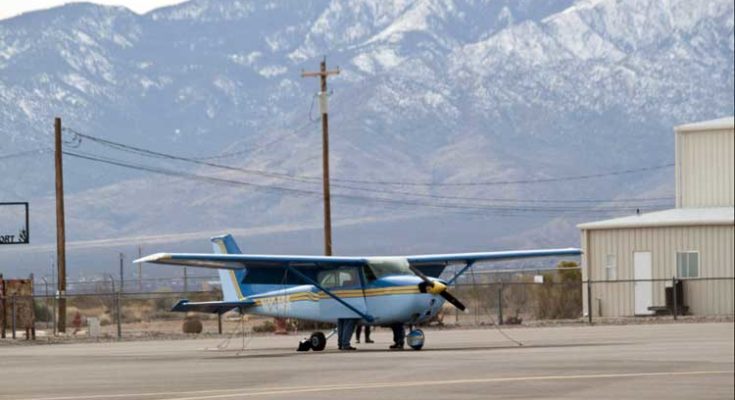 Jon Johnson File Photo/Gila Herald: The Safford Municipal Airport will have a new private hangar constructed to keep the owner’s plane safe from the elements.

SAFFORD – Aviation is big business in Arizona, and the city of Safford has perhaps a hidden jewel in the form of the Safford Municipal Airport.

The Safford City Council unanimously approved granting a 20-year land lease for its C-5 area to Charles Dunlap, of Pima, for the purpose of building a hangar for his private plane. The lease area consists of a 4,312-foot-space.

Dunlap is looking to store his 2010 Lancair 360 aircraft in the hangar. The Lancair 360 is a two-seat aircraft marketed in a kit form, according to Lancair. It is a low-wing monoplane with conventional configuration and retractable tricycle undercarriage that cruises at 235 mph.

The agreement will commence March 1, and Dunlap has agreed to pay $515 per month to lease the space with a 3 percent increase each year during the term of the lease. After the 20 years, Dunlap will have the option to negotiate the lease for three, five-year terms.

The city has improved the airport over the last seven years by utilizing nearly $7 million in grant funds. In 2016, the city accepted a $1.5 million grant from the Arizona Department of Transportation to replace lights and signs and redo the electrical system for Runway 8-26.

In 2014, the city utilized a grant of about $700,000 to mill and replace the Porous Friction Course overlay of Runway 8-26. The specialized asphaltic concrete allows water to drain through. A nearly $1.9 million apron reconstruction at the airport was also completed in 2014, and the city used about $2.3 million in federal money for a complete reconstruction of Runway 12-30, which was completed in October 2010.