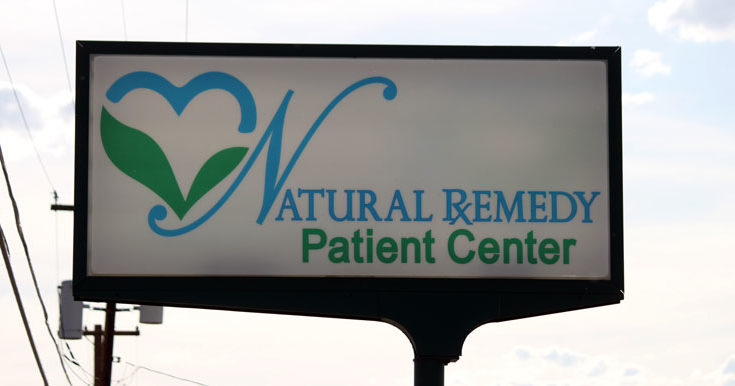 Jon Johnson Photo/Gila Herald: The Natural Remedy Patient Center would like to relocate to Downtown Safford.

Move is desired for patient privacy and security, modernization, and to create a state-wide edible product

SAFFORD – Representatives from the Natural Remedy Patient Center (a medical marijuana dispensary) met with the Safford Downtown Association on Wednesday and presented a plan to move from the dispensary’s current location at the intersection of 14th Avenue and U.S. Highway 70 to the former Chalo’s La Casa Reynoso restaurant at 611 S. 6th Ave. The building was more recently the home to the now defunct Sushi King Uno restaurant.

NRPC Director of Wholesale Spencer Grijalva and general manager of the Safford location Shelby Jones presented to the association and explained the reasoning behind the move. While the move would assist with patient privacy and security, the main reasoning appeared to be the ability to own the building and modernize it to their desired standards as well as make use of the already existing kitchen to create a cannabis-infused edible manufacturing facility that would sell wholesale to other dispensaries throughout the state.

NRPC is the only allowed medical marijuana dispensary for Graham County in accordance with the Arizona Medical Marijuana Act passed by voters. The act allowed for one dispensary per each Community Health Analysis Area (CHAA) and Graham County, like Greenlee, Gila, and other counties, only have one CHAA each.

When the AMMA first passed, the city of Safford created zoning in which a dispensary could operate. Under those guidelines, one of the few places available to the NRPC was its current home. To be able to re-locate to Downtown Safford, the city must re-zone the area. According to Safford Planning and Community Development Director Susan Anderson, the application for the re-zone would first go to the city’s Planning and Zoning Committee and then onto the Safford City Council, which would conduct a public meeting on the proposal prior to voting on it.

According to Grijalva, the dispensary receives about 125 customers per day but with the recent closure of the dispensary in Gila County due to being purchased and moved to Tucson and NRPC’s ability to serve other counties with the Safford store acting as a hub, the potential number of customers will increase. Working as a hub, the Safford location would package and sell the items at the home store and then deliver it to hub locations in Gila or Cochise counties. That way, the sales tax remains in Safford. Even without acting as a hub, Grijalva said the dispensary reported paying nearly $140,000 in sales tax last year and through April of this year had already paid more than $62,000.

Additionally, if the move is approved and an edible manufacturing facility is made, the facility would not only create upward of 20 possible new jobs but is expected to have between $2.3 to $2.7 million in sales in the next three years and produce an additional sales tax revenue of $140,000 to $150,000 annually on top of the possible $180,000 it looks to pay this year. That would push the dispensary over what automobile dealerships each contribute in sales tax revenue to the city.

The proposal received interest from the association, with several members expressing their support. However, as a body as a whole, no definitive feedback was given to Anderson, who was looking to take back the reaction from the association to Planning and Zoning and City Council.

Anderson said her biggest issue would be with parking and the additional traffic that could clutter up the Downtown area, including delivery vehicles. It was pointed out that the building previously was a thriving restaurant for a number of years and that it received shipments via large semi-trucks. Grijalva said the dispensary’s delivery vehicles were small compact vans that would not be an issue. Additionally, employee parking would be at a separate lot and there is another lot that could be turned into more parking, according to Jones.

The NRPC currently grows its own cannabis off-site at a cultivation center in the Chino Valley and its farm is 100 percent organic. If the move is approved, the grow site will remain in Chino Valley and the kitchen area of the building would be sealed off from the sales side. In accordance with the AMMA, a kitchen facility must be at the same location as the dispensary but also be a separate property. The medical marijuana program is administered by the Arizona Department of Health and is most likely the most regulated business in the state with plants being accounted for from seed to sale.

The NRPC services roughly 2,800 qualified patients in Graham, Greenlee, and Gila counties, with more than 1,800 coming from Gila County alone. According to Jones, the dispensary’s database shows roughly 2,100 different customers who have utilized the store’s services. Statewide, there is nearly 200,000 qualified patients and nearly 6,000 employees involved in the medical marijuana profession.

The next step in the process will be to come before the Planing and Zoning Committee and get approval for a zoning change. The issue will then be up to the Safford City Council to decide on its fate.