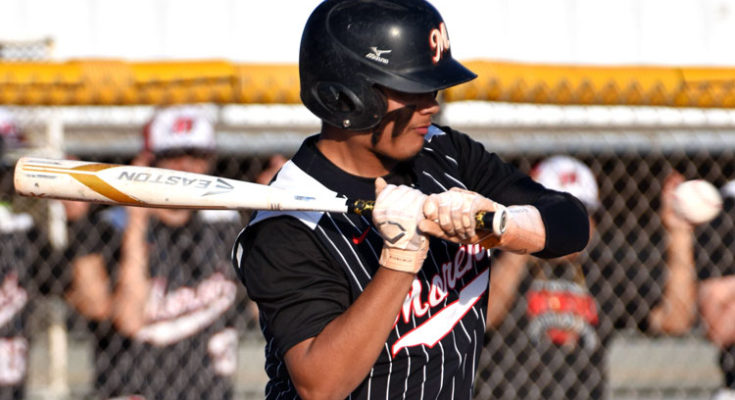 Mogollon prevailed in the 11th inning while Morenci succumbed 3-2 in the bottom of the seventh inning.

Meanwhile, the Evergreen State entrant and champion, the Lake Washington Kangaroos (22-2 overall, 12-0 district for No. 1), were in a must-win district tourney game, winning 2-1 with two outs in the bottom of the ninth inning May 11, to qualify for the state meet. Their first round opponent was against the District 8 champion Kennewick Kamiakin Braves (20-2, 14-2 Mid-Columbia District) Saturday, May 18 at 1 p.m. They then faced Mount Spokane at 4 p.m. in the second round.

Seven other Lions tourney participants were also in the post-season, the Safford Bulldogs in 3A; and the Thatcher Eagles, the Miami Vandals, the Phoenix Christian Cougars, the Pima Roughriders, the Saint Johns Redskins, and the Willcox Cowboys in 2A.

Safford upset the Lakeside Blue Ridge Yellow Jackets twice, 9-6 in the regular season finale April 24 to qualify, and 8-5 as No. 22 versus No. 11 during the play-in round April 30, both at Blue Ridge, before bowing out in the next round 3-1 to No. 2 Queen Creek American Leadership at the Surprise Sports Complex May 3. The Patriots edged the Surprise Paradise Honors Panthers 2-1 in the quarterfinals before the No. 6 Tucson Sabino Sabercats posted an 8-0 semifinal shutout May 11. Sabino faces the No. 4 Sahuarita Mustangs for the title at Mesa Hohokam Stadium May 13 at 4 p.m.

In the first round, Saint Johns was upset 13-2 as the No. 8 seed by No. 9 Flagstaff Northland Prep; No. 4 Thatcher shutout No. 13 Tucson Saint Augustine Catholic 11-0 before falling 7-4 in the quarterfinals to No. 5 Camp Verde; and No. 2 Phoenix Christian eliminated No. 15 Phoenix Country Day School 11-1 (6 inn.) before bowing out 4-2 to No. 10 Morenci in the quarterfinals.

Duncan and Elfrida Valley Union ended No. 17 and No. 18, respectively, in the 1A final rankings. The top 16 teams qualified for the state meet.

The Joseph Morse-coached No. 10 Wildcats (21-10 overall, 4-1 state playoffs) topped No. 7 Benson 4-2 in the first round May 3, and edged No. 2 Phoenix Christian in the quarterfinals and No. 3 Bisbee in the semifinals, both 3-2, to vault into the championship game. The Wildcats won the 1986 title at Diablo Stadium.

Since reaching the semifinal round in 2006 (lost 7-4 to Scottsdale Christian) and 2008 (lost 11-7 to Bisbee), the Wildcats had a 3-18 record and a 17-game losing streak before splitting a double-header with the Pumas earlier this season.

The Wildcats defeated Phoenix Christian in a prior state meet pairing, 5-2 during the 2016 first round at Goodyear.

Senior catcher Antonio Gallegos and junior infielder / pitcher Zachary Waltrip were named to the all-tournament team in Morenci. The Wildcats went 2-1 in Francis Waldorf Stadium during the April tourney, downing Valley Union 20-4 in three innings and Willcox 10-2 (6 inn.) before falling 15-1 (5 inn.) to Lake Washington for the title.

“At least we didn’t get shutout,” Morse said.

Morse wore an ear-to-ear smile, seeing the Wildcats play as they were capable of during the month of May, following the end of April play-in game with Pima.

A one-out bottom of the seventh Ryan Witte single broke a 2-2 tie, allowing a walked sophomore Drew Zittel to decide the outcome. Game over.

Scottsdale Christian junior Benjamin Meyerson walked, stole second and was singled in by senior Jacob Peterson to tie 1-1 with two outs. Peterson was thrown out attempting to steal second.

The teams were retired in order during the second inning.

In the third, Martinez walked with one out, Roybal reached first on an error, Trujillo walked to load the bases, and sophomore Lance Morey drilled a sacrifice fly to center field allowing Martinez to score. Senior Matthew Garcia singled to again load the bases, but a ground out halted Morenci’s scoring.

Gallegos singled on with an out in the fourth, but two more strikeouts left him on. The Eagles were retired in order on a double play initiated by Martinez to Waltrip at second to junior Omar Ortega at first.

In the fifth, a two-out fielder’s choice tagged singled Morey. The Eagles tied it 2-2 with Witte’s one-out single, driving in senior Zachary Waslewski who had reached first on an error. Junior Brandon Blair threw out Zittel for the second out, and a ground out recorded the third out.

Morenci went three up and three down in the sixth and the Eagles got two runners on with walks, but the next three batters went down on a strikeout, fly out and strikeout.

Morey batted .500 (1-2, sac, RBI) while Gallegos, Martinez, and Garcia went .333 (1-3) apiece. Martinez struck out seven, walked five, and yielded three hits while facing 23 batters during six innings. Waltrip struck out one, walked one and allowed one hit while facing three batters during 1/3 inning of relief.

A two-out outfielder error let Roybal reach second base in the seventh inning. Classmate Trujillo doubled him in for the deciding run.

Senior Eduardo Vasquez singled on but senior J.C. Avechuco’s grounder was turned into a double play by Waltrip, stepping on second and throwing to Roybal at first base. Bisbee senior Eddie Alvarez was beaned, junior Dano Lopez singled on and freshman Emiterio Hernandez grounded out to Waltrip to end the game.

The East Region champion Pumas led 1-0 through four innings before successive fifth inning singles by Morey and Garcia put runners on with no outs. A one-out walk loaded the bases, Gallegos’ walk drove in the tying run, and Waltrip’s walk drove in the go-ahead run.

A beaned Hernandez scored on a two-out infielder throwing error to tie the score at 2-2 in the sixth.

Martinez tripled in a walked Waltrip with two outs in the third and Roybal singled him in for a 3-1 advantage.

Phoenix Christian added a run with walked No. 9 batter freshman Adon Alvarado in the seventh, but clean-up batter sophomore Brock Zeller flied out with the bases loaded to end the game. An error and two successive beaned batters loaded the bases.

Roybal singled in walked lead-off batter Gallegos with two outs in the first and Cougars walked junior Nathan Tarver tied the score in the bottom of the frame.

Blair doubled with one out in the seventh, a two-out Waltrip single drove him in, and Waltrip scored on a wild pitch for a 4-2 advantage. A bases loaded ground out halted the scoring.

Sandoval retired Benson in order on two ground outs and a strike out to end the game.

The Wildcats led 2-0 after two, Trujillo reached first on an error, Garcia singled on, and Gallegos tapped a two-out, 2-0 pitch for a double, scoring both Trujillo and Garcia.

Bagdad ousted the No. 16 Teec Nos Pos Red Mesa Redskins 15-1 in the first round, the No. 9 Bullhead City Mohave Accelerated Patriots 19-0 in the quarterfinals, and the No. 4 Superior Panthers 4-3 in the semifinals.

The Mustangs went 2-2 in Morenci and closed the regular season by going 2-0. Mogollon fell 7-2 to 3A Safford in the first round April 11, downed Pima 13-5 in five innings on April 12 and Saint Johns 9-3 in six innings April 13 before falling 9-3 to Miami in the third place game. Senior Trey Tenney and junior Timmy Porter were selected to the all-tourney team.