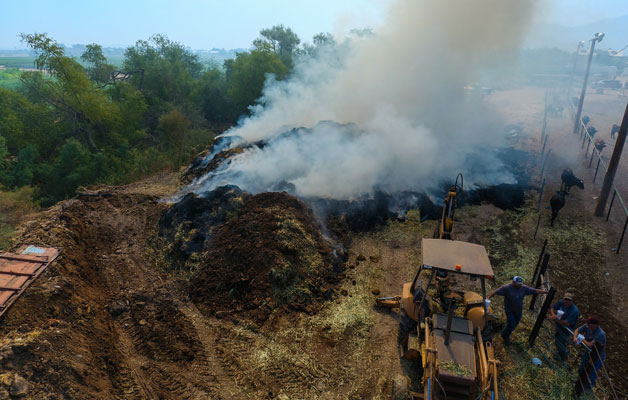 Jon Johnson Photo/Gila Herald: A haystack fire at Alder Arena destroyed approximately $5,000 worth of hay Thursday and Friday. The cause of the fire is unknown.

PIMA – Area residents awoke to the smell of smoke Friday morning due to a mysterious hay fire smoldering at Alder Arena off 200 East.

According to the Alder family, they were alerted to the fire early Thursday night around 7:30 p.m. and located one of their haystacks on fire. The cause of the fire is not known.

The Pima Fire Department doused the blaze, and the Alder family worked until about 1 a.m., Friday, to move another nearby haystack and contain the area that was on fire.

When they awoke the next morning, however, they realized the haystack became reignited overnight. As of about 11 a.m., the family was still tending to the haystack, keeping the fire contained as it burns all the fuel. The family estimated the loss of hay to be roughly $5,000.

Alder Arena is home to about 50 head of cattle and it has hosted a monthly team roping competition, the Alder Pot, every second Saturday of the month for the past 12 years. For more information on the event check out Alder Arena’s Facebook page here.