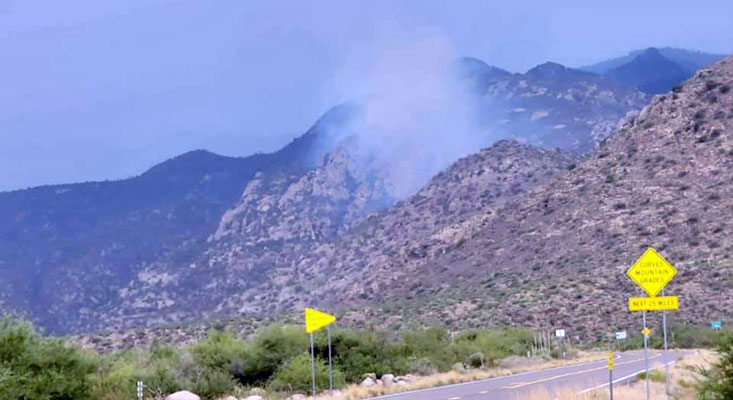 Contributed Photo/Courtesy McKayla Martinez: Smoke rises from the Jacobsen Fire on Mount Graham on Friday. As of Monday, it was listed as being controlled.

MOUNT GRAHAM – A likely lightning-caused fire that began Friday just south of Noon Creek on Mount Graham was listed as controlled as of Monday.

A total of 5.8 acres were burned in the Jacobsen Fire before it was quenched by a combination of firefighting efforts and significant rain.

The fire began around 4 p.m. On Friday, after lighting struck the area. Witnesses advised seeing the lighting strike and then smoke started to billow.

The firefighting effort was aided by significant rainfall in the area on Saturday and Sunday, leading to the Monday morning listing as the fire being controlled.

The Frye Fire was started by lightning on June 7, 2017, and eventually burned roughly 48,443 acres on Mount Graham. During that fire, heroic efforts were undertaken to save structures on the mountain, including the Mt. Graham International Observatory, cabins at Turkey Flat and Old Columbine, and Angle Orchard. The fire decimated the population of the endangered Mt. Graham red squirrel, which dropped in population from 252 to about 35, according to an annual survey conducted after the fire.