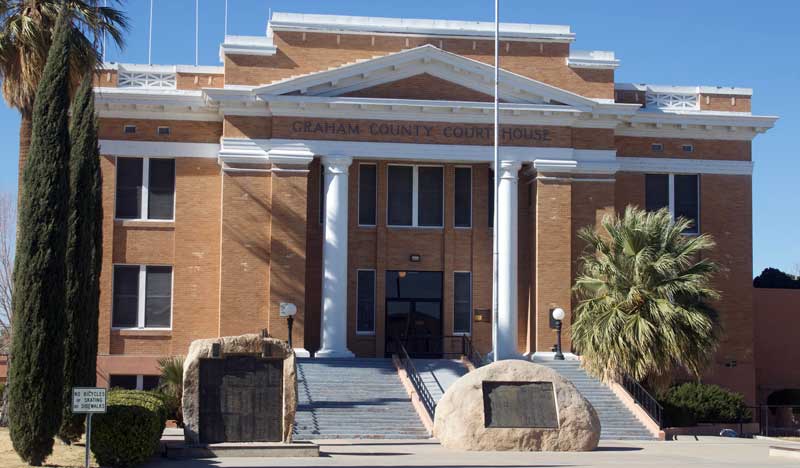 SAFFORD – After the court found Graham County Superior Court Clerk Cindy Woodman violated procedure for storing evidence and, according to both defense and prosecuting attorneys, possibly gave false statements under oath, yet another controversy has unfurled in the case against Manuel Ramon Campos, 38.

On Tuesday, Campos’ defense attorney questioned whether a juror in the first trial in which Campos was found guilty of prohibited possession of a deadly firearm (Guilty! Jury finds Manuel Campos guilty of possessing a deadly weapon in Thatcher shooting: Gila Herald – June 15, 2019) had lied about not knowing the defendant prior to the trial.

The juror found himself forced to testify and while he had worked with Campos’ former step-father for 30 years, worked with Campos’ step-brother for a period of time, lives down the street from Campos’ mother, and previously interacted with Campos while the defendant sped on an all-terrain vehicle down the juror’s street to his chagrin, the juror insisted he did not know Campos prior to the trial as he stated during the jury selection process.

The issue came to light when the juror went back to work after the trial and spoke about it to his co-workers, including Campos’ former step-father. The juror testified that he didn’t speak about the trial until after it was completed and jurors are released to speak about their experiences and even then did not realize his co-worker was related to Campos.

“It’s going to be pretty hard for me to conclude absent of something pretty extraordinary that I haven’t seen or heard that this witness perjured himself or that he even knows Mr. Campos,” Judge Peterson said.

During Tuesday’s hearing, Flores advised that the defense intends to file for a change of venue due to the amount of media coverage of the case and because the defense doesn’t feel that evidence would be kept safely under the direction of Graham County Clerk of the Superior Court Cindy Woodman, who the defense also plans to call as a witness.

Flores then later accused Woodman of giving false statements during her testimony at an evidentiary hearing. (Defense attorney accuses Clerk of the Superior Court of lying while under oath: Gila Herald – July 25, 2019)

Because of those issues, Flores said she will call Woodman to testify and that a change in venue was necessary.

“If she is a witness, being (she is) the clerk of the court all of the other staff serve under her direction still whether or not she’s a witness or not and we are questioning her in a very specific way about her conduct as a clerk should give the appearance, potentially, to jurors to question staff that works under her,” Flores said.

Judge Peterson advised that, much to his chagrin, the knowledge of the issued with Woodman’s mistake is well known and has already been dealt with. He said the issue would not affect a fair trial for Campos.

“I’m doing everything in my power to give that man a fair trial,” Judge Peterson said.

Judge as a witness?

Another question is whether either the defense or prosecution, headed up by Cochise County Deputy County Attorney Daniel Akers, would, for some reason, call Judge Peterson as a witness due to his ruling in the evidentiary hearing regarding the mishandling of evidence by Woodman.

“The last thing on this planet I want to do is be a witness in this case,” Judge Peterson said. “I want to be the judge. I want to do what I think my duty is.”

If either side did choose to call Judge Peterson as a witness, he would not be allowed to adjudicate the trial for obvious reasons and another judge would have to be assigned. However, Judge Peterson said he would not recuse himself from the case if possible.

“I’m not recusing myself,” Judge Peterson said. “Mr. Campos doesn’t like me. I know that. I’m not offended by it.”

“I never said I didn’t like you,” Campos replied.

At the end of the day, sentencing for the initial trial’s conviction of possession of a deadly weapon by a prohibited possessor – which has a sentencing range of 10 – 15 years – was set for Aug. 28. A Donald Hearing, which goes over the possible outcomes if a defendant goes to trial and loses, will also be held the same day.

While Flores believes a settlement and plea agreement may be reached before his second trial scheduled for September, Akers was not as optimistic.

“I have a solution in mind, I just don’t think Mr. Campos would be willing to accept it,” Akers said.

The second trial deals with burglary and aggravated assault charges regarding his alleged actions Jan. 31. (Police report Campos broke into a residence, threatened the victim with a shotgun and fired a round into the floor: Gila Herald – Feb. 7, 2019)

“This keeps getting more and more complicated as time goes on,” Judge Peterson said.