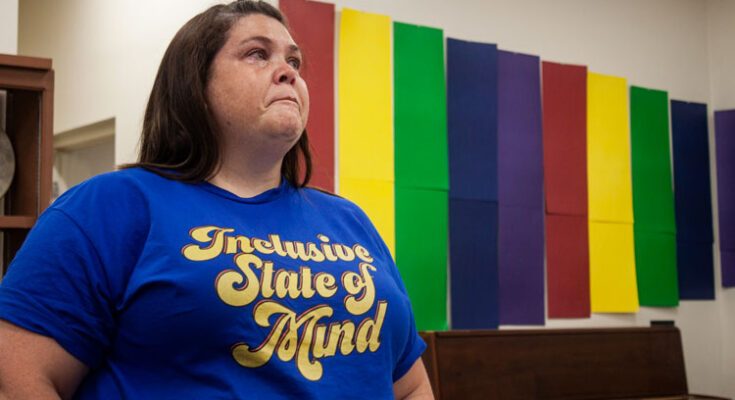 Jon Johnson Photo/Gila Herald: Melinda West fights back tears as she describes to the Pima School Board how she felt when she found out her special needs son had been left out of the Pima High School yearbook. All of the dual-enrolled students with Dan Hinton Accommodation School were accidentally not included due to a data snafu, according to school officials.

PIMA – Being a special needs student, Melinda West’s son Ross has had a challenging scholastic career but has remained involved in activities at Pima High School even as a dual enrollment student at Dan Hinton Accommodation School, which runs a special needs school in the Pima School District.

That made it that much harder, Melinda said, when they found out her son and the other dual-enrolled students at Dan Hinton were not included in the Pima High School yearbook.

“I was at work the last day of school when Ross called me and said, ‘Mom, I’m not in the yearbook.’ I said oh Ross your school picture is in there.”

But it wasn’t. Neither were any of the dual-enrolled Dan Hinton students and Melinda wanted to know why. The Dan Hinton Accommodation School and Brighter Day Preschool is in the Pima School District but takes in special needs students from throughout the county. Like other schools in the district, it has its own yearbook.

Melinda brought her concerns to the Pima School Board at its June meeting, and the board expressed its apologies for the oversight. Pima School Board President, Troy Thygerson, also serves as the superintendent for Dan Hinton.

According to Pima Superintendent Sean Rickert, the exclusion of the students from Dan Hinton was an accidental error due to new software the school had recently begun to utilize with the Dan Hinton students to, ironically, better serve their needs. Unfortunately, the software caused the list of Dan Hinton students who are also students at Pima High School to accidentally not be included with the list of all the high school students used by the Yearbook staff, which was made up almost entirely of students. By the time the mistake was known, the yearbooks had all been printed and given to students.

Rickert and the school board apologized to Melinda for all the dual-enrolled students accidentally not being included and he advised that moving forward they would have redundant checks to make sure something like that doesn’t happen again. That statement was echoed by Thygerson after the meeting.

“They’re Pima students first and foremost,” Thygerson told the Gila Herald. “There was a mistake and it’s not going to happen again. We’re going to have at least three different ways to check and verify and follow up. It’s very unfortunate and we’re sincerely sad and apologetic and don’t feel good about it at all. But we’re going to make improvements to ensure that this doesn’t happen again and all Dan Hinton students will have their pictures sent to their respective high schools and junior highs for annuals and activities. We’ll make it happen.”

Melinda told the board that she was also unhappy with the time it took to get a response from the school after she first brought up the issue and that an offer to simply “buy back the yearbook” was not acceptable either.

“I got lots and lots of ‘sorry, it won’t happen again,’ but that’s not good enough,” Melinda told the board. “You guys need to do better and be accountable because everybody needs to be accepted.”

Melinda said she wasn’t sure what her next move was but that she felt the school violated the rights of the students and specified Section 504 of the Rehabilitation Act and Title 11 of the Americans with Disabilities Act.

According to the U.S. Department of Health and Human Services, Section 104 of the Rehabilitation Act of 1973 applies to employers and organizations that receive federal financial assistance and forbids organizations and employers from excluding or denying individuals with disabilities an equal opportunity to receive program benefits and services.

According to the ADA, Title II applies to state and local government entities, and, in subtitle A, protects qualified individuals with disabilities from discrimination on the basis of disability in services, programs, and activities provided by state and local government entities. Title II extends the prohibition on discrimination established by section 504 of the Rehabilitation Act of 1973.

Ross will be a dual-enrolled senior at Pima and Dan Hinton in the fall and also takes culinary arts classes in the Safford School District. Melinda said Ross wants to be the “Bearded Baker” after he graduates high school and either bake or cook for a living.