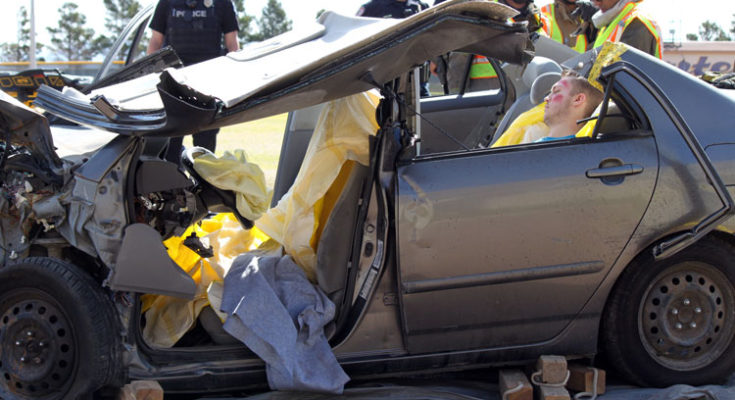 THATCHER – First responders from throughout Graham County participated in a joint exercise to show possible consequences of impaired driving to area freshman and sophomore students during a mock DUI event at Eastern Arizona College on Wednesday.

The exercise is a bi-annual event organized by the Graham County Substance Abuse Coalition and utilizes wrecked cars and student actors to portray crash victims as police, fire, EMS, and others treat the scene as if it was real. Students witness the crash play out in real time as an officer explains what is happening over the P.A. system.

While Fox was arrested for DUI and manslaughter, the car crash victims were examined at the scene and removed by either ground ambulance or helicoptered from the scene. Firefighters worked with the jaws-of-life and a saw to cut open the roof to get to the last victim, who was deceased. The dead body was then loaded up by McDougal’s Caldwell Funeral Chapel & Gila Valley Crematory and taken away in a body bag.

Thatcher DUI Coordinator Brian Ellsworth said the agencies all worked well together on the simulation and that he felt it was important that the youth see what can happen.

“It’s always good for the kids to come see a real-world situation,” officer Ellsworth said. “We do have accidents around here; drinking and driving is prevalent. We believe it’s important to be proactive and have activities like this to go educate school students and the public any way we can as to dangers of impaired driving and how it can be prevented . . .”

After the simulation was complete, Graham County Superior Court Judge Michael D. Peterson and community activists Lynn Smith spoke to a hushed audience about their experiences in dealing with situations just like the students had just witnessed.

Judge Peterson said he deals with the aftermath of such instances and said when people sober up they realize “in absolute terror” what they have done and the consequences. He recalled a recent case in which an upstanding citizen came before him for sentencing after he accidentally killed his own daughter in an ATV crash when he drove while intoxicated.

“I had to sentence this man and he told me something I will never forget and I never, ever want to hear in my courtroom again because of the tragedy that it was,” Peterson said. “He said, ‘Judge, whatever you do to me – however long you send me to prison – will not be as bad as waking up every single morning with my daughter’s death – her blood – on my hands. I killed her.’”

Smith told of her son dying 21 years ago in a truck crash while he and the driver were both drunk, but added that since she last spoke at the event two years ago, she has now lost another son and grandson to substance issues and her daughter was sentenced to five years in prison because of the same issues. Smith said she requested diving intervention to save her daughter from herself.

“I prayed her into prison because I knew she was going to die if she didn’t go to prison and maybe someone else along with her if she was driving a vehicle,” Smith said.

Graham County Substance Abuse Coalition Director Kathy Grimes lauded the work of all involved and thanked the various organizations who participated in the event and those that helped make it happen.

“Everybody always comes together for us and helps so much,” Grimes said. “They contribute whatever they need to do. Our goal is to educate our young people about the risks of drugs and alcohol and encourage them to lead healthy lives and not get involved in those things.”

Grimes also expressed her pleasure at how the proceedings went.

“We have some great support from our community, so it goes great every year . . . Thank you Graham County for all your contributions and helping us to raise healthy and successful young people.”

Click here to view a photo album from the event.