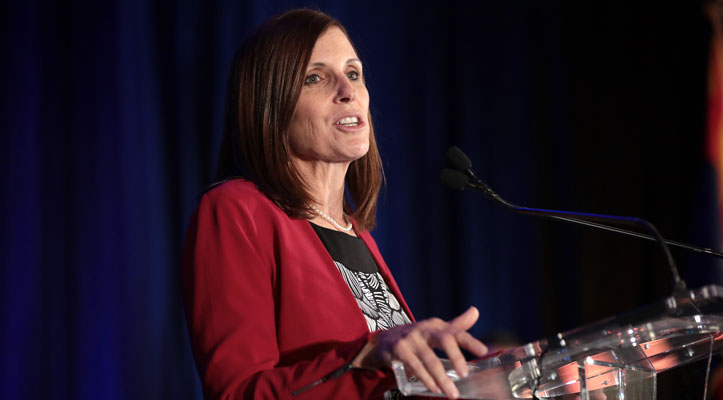 Photo By Gage Skidmore/Creative Commons: U.S. Senator Martha McSally speaks with attendees at the 2019 Update from Capitol Hill hosted by the Arizona Chamber of Commerce & Industry at the Arizona Biltmore Resort in Phoenix. McSally started airing Spanish-language TV ads recently, well behind her Democratic challenger. However, McSally’s campaign says they ads are just one part of its outreach to Latin voters that has been going on throughout the campaign.

PHOENIX – Sen. Martha McSally, R-Arizona, bought $110,350 worth of ads on Spanish-language TV stations this week and last – just a quarter of what her Democratic challenger has spent over the past two months.

McSally’s buys on Univision and Telemundo stations in Arizona are her first Spanish-language broadcast ads in this campaign, according to reports filed with the Federal Communications Commission.

They come in the final weeks of the campaign as McSally struggles to hold on to her seat against Democrat Mark Kelly, who has been consistently ahead in polls. The two are scheduled to face off Tuesday in their only debate of the campaign.

With Kelly scheduled to spend about $100,000 a week on Spanish-language ads for the rest of the campaign, some analysts question whether McSally’s effort will be enough.

“It’s a little late, frankly, because the Hispanic vote is the largest minority group population as a voter segment,” said Mike Noble, chief of research at OH Predictive Insights.

But the McSally campaign said the latest ads are just one part of their ongoing outreach to Latino voters in this election. Aides said the campaign has been running digital ads in Spanish and has Spanish-speaking volunteers making voter outreach calls. They note that McSally has appeared at roundtables with Hispanic business leaders and has been endorsed by a group of Hispanic faith leaders.

For both campaigns, their Spanish-language ads mirror ads playing in English throughout Arizona.

An ad provided by the McSally campaign shows a Tucson Latina business owner who credits McSally for helping small businesses like hers secure loans that helped them through the COVID-19 pandemic. McSally has also painted herself as a better choice than Kelly, whom she calls too liberal and dangerous for Arizona.

A spokesperson for Kelly’s campaign said they intentionally created Spanish ads that have the same messaging as those in English, discussing issues such as healthcare and the economy. The campaign has “the intention of spreading Mark’s message to voters, whether they’re voters who speak Spanish or voters who speak English,” the spokesperson said.

Both campaigns have said they are also focused on Latino voter outreach outside of these ads, including voter registration drives by the Kelly campaign in both English and Spanish.

Lisa Magaña, a political science professor at Arizona State University, said the sustained effort to reach Latino voters is part of what has made them such an important demographic in this election.

“We know that voter registration for Latinos in Arizona has been going up … it’s just incredible turnout,” she said. “We know that part of it is because of more outreach that we hadn’t seen before in the Latino community.”

Noble said the reason Democratic candidates have more support from Latino voters is that they “have done a much better job putting that time in consistently with this group.”

“The GOP will put in the time when it comes right around election time, but you don’t really see a kind of prolonged, sustained effort thereafter,” he said.

McSally ad buys this year appear to be an improvement from her 2018 campaign when FCC records do not show any purchases on Spanish-language stations. But Magaña questions the effectiveness of the current ads.

The Kelly campaign spent $417,694 on ads on Telemundo and Univision in August and September alone, according to the FCC records.

One reason for Kelly’s head start on advertising may be the fact that he has raised more money than McSally and has more to spend.

In their latest filings with the Federal Election Commission, Kelly reported having raised $46.1 million as of June 30 and having $21.2 million still in the bank, compared to McSally’s $30.4 million raised and just under $11 million in cash on hand.

Even though it has to be more strategic about where and when it spends its money, the McSally campaign strategy “doesn’t make a lot of sense,” to Noble.

“You have to put in more time,” he said. “When you’re doing this two weeks before ballots get dropped in the mail, it could kind of seem like you know, ‘Where were you six months ago or two years ago?’”

Both Magaña and Noble believe Kelly appeals to Hispanic voters who may be turned off by the fact McSally has aligned herself with President Donald Trump.

“He (Kelly), I think, as a moderate, has wooed some of those that have been turned off maybe by Donald Trump being too far right,” Magaña said.

And neither one thinks the last-minute efforts will be enough to let McSally hold her seat next month.

A Sept. 16 poll by OH Predictive Insights had Kelly leading McSally 52% to 42%, with a margin of error of plus or minus 4 percentage points. A RealClear Politics roundup of polls gave Kelly a 6.6 percentage point lead – 49.8% to 43.2% – as of Monday.

Noble said that for McSally, the strategy now is “about finding something outside of her traditional base because her base lines up very closely with Trump’s base.”