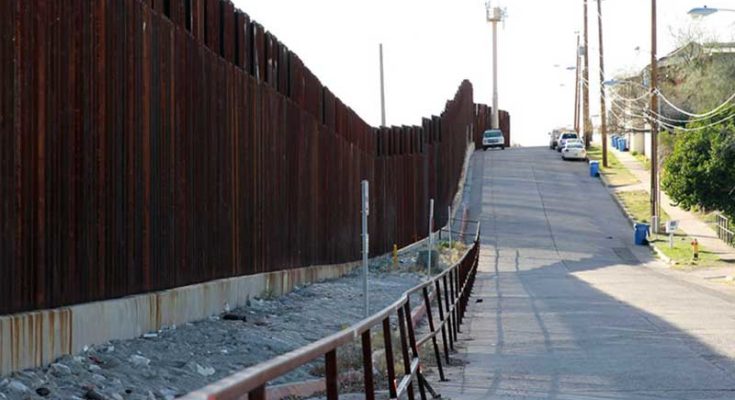 Photo by Sophia Kunthara/Cronkite News: Shown is a stretch of border wall near Nogales. Immigration reform bills in the House and Senate call for better border-security technology and a detailed report on the feasibility of a wall, drawing the ire of President Donald Trump.

WASHINGTON – Sen. John McCain introduced a bill Monday that gives DACA recipients a path to citizenship and calls for beefed-up border security – but it excludes funding for a border wall, causing the president to brand it a “waste of time.”

The bill by McCain, Republican of Arizona, and Sen. Chris Coons, Democrat of Delaware, mirrors a bipartisan House bill that would protect “DDREAMers” while calling for stronger border security through “the most practical and effective technology available by 2020,” such as radar surveillance, drones and seismic detection tools.

Before the bill had even been introduced, however, President Donald Trump was tweeting his displeasure.

“Any deal on DACA that does not include STRONG border security and the desperately needed WALL is a total waste of time,” Trump tweeted Monday morning. “March 5th is rapidly approaching and the Dems seem not to care about DACA. Make a deal!”

March 5 is the date Trump set for the expiration of Deferred Action for Childhood Arrivals, or DACA, the Obama-era program that protected about 800,000 immigrants who were brought to this country illegally when they were children.

That’s not the only deadline Congress faces. The latest federal budget extension is set to expire at midnight Thursday, triggering a government shutdown if lawmakers can’t agree on another extension – something that happened last month when Senate Democrats and Republicans failed to compromise on immigration.

Congressional leaders have said they expect to avoid a shutdown this week. But Coons and McCain said the immigration issue needs to be dealt with, so that lawmakers can focus on a long-term budget plan instead of continued short-term extensions.

“It’s time we end the gridlock so we can quickly move on to completing a long-term budget agreement that provides our men and women in uniform the support they deserve,” McCain in a prepared statement with Coons.

The Senate proposal mirrors a bipartisan House bill, the Uniting and Securing America (USA) Act, whose 54 co-sponsors were split evenly between Democrats and Republicans. All four Arizona Democratic House members have signed onto the bill, but none of the state’s Republicans has so far.

Any deal on DACA that does not include STRONG border security and the desperately needed WALL is a total waste of time. March 5th is rapidly approaching and the Dems seem not to care about DACA. Make a deal!

The bills would create a pathway to citizenship for DACA recipients who have been here continuously since Dec. 31, 2013, who were younger than 18 when they were brought into the country and who meet other requirements, such as keeping a clean criminal record. The bills also call for hiring more judges to clear up immigration court backlogs.

The bulk of the 66-page bill deals with border security.

Rather than directly funding Trump’s proposed border wall, the bill would give the Department of Homeland Security more resources for enhanced security technology.

The department also would have to report back to Congress within a year with a comprehensive border strategy, including an inventory of current systems and projected per-mile costs of alternatives, such as a wall.

“The bill I’m introducing with Senator McCain today doesn’t solve every immigration issue, but it does address the two most pressing problems we face: protecting DACA recipients and securing the border,” Coons said in the statement with McCain.

“I believe there is bipartisan support for both of those things, and I believe that we can reach a budget deal that increases funding for our military and important domestic programs.”

But this bill is just the latest of many that have been introduced, all of which face an uphill climb, said Theresa Brown, director of immigration and cross-border policy at the Bipartisan Policy Center.

“Like every other potential immigration deal out there, where do the votes come from?” Brown asked. “Are there enough votes for this between the Republicans and Democrats? Will the president sign it?”

“It’s not clear which of the various proposals, deals, un-deals, and frameworks can actually garner the majorities in the House and the Senate.”

The White House has said any proposal from Congress would have to meet four goals: protecting DACA recipients, securing the border, ending the visa lottery system and ending family migration, derided by opponents as “chain migration.”

The administration released a plan last month that called for a multiyear path to citizenship for as many as 1.8 million DACA recipients and a $25 billion trust fund for a “border wall system.”

But architects from Southwestern states have gone on record opposing a wall until details on its scope and cost are provided.

“We first need to admit that there is not a definitive wall proposal – there’s an idea of a wall, but we don’t know where it would be built, how long it is, how tall it is or what it’s made of,” Robert Miller, president of the Arizona chapter of the American Institute of Architects, said in a phone interview Monday.

“We don’t even know what the performance criteria is or who is paying for it. We really don’t know if the wall is going to be successful or not until a finalized proposal is done.”

Coons and McCain acknowledged their bill does not address all of the president’s demands, including the visa lottery and family-based immigration, but they’re hopeful their plan can act as a “foundation for future conversations.”