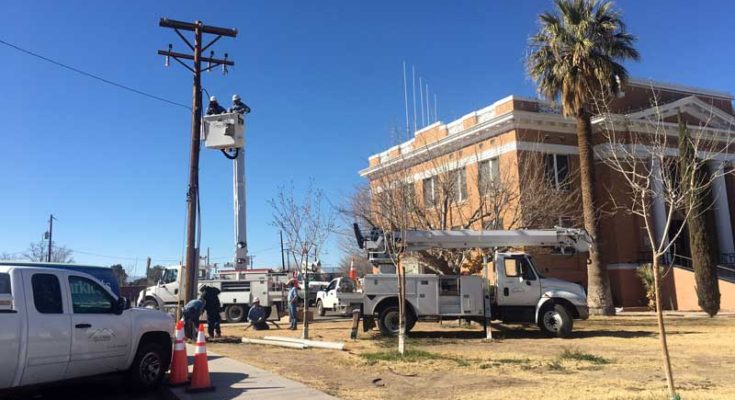 SAFFORD – The people who were scheduled to face judges in three courts Thursday received a reprieve for the day after an electric outage ground the proceedings to a halt.

Not everyone got off so easily, however, as one of the trials was held at a separate venue.

The primary underground power feed to the Graham County Courthouse failed early Thursday morning between 8 and 8:30, halting all proceedings and evacuating the courthouse.

According to Safford Electric Division Manager Dan Braatz, one of the three cables of the primary underground feed faulted and blew the courthouse’s fuses, which made an audible explosion.

Courthouse employees and others were huddled in the lobby near the front entrance when the explosion happened and nobody was injured.

Safford Electric Department workers arrived on scene and had to pull all three cables out to replace the damaged one since they were all intertwined. While pulling the cables out of the conduit, the damaged cable broke in two, forcing the crew to pull the cable out from both sides. Braatz said the age of the cable was the likely reason for it faulting.

While the process took all day, it could have been worse had the utility workers not installed it in conduit. Back when the job initially was performed, it was commonplace to direct bury cable and not use conduit. If that had been the case, the crews would have had to break up all the cement and dig up the entire line.

“Luckily, back then when they converted that to underground they thought ahead and put it in conduit,” Braatz said.

As of 4 p.m., the crew was still working on finishing up and restoring power, but Braatz said the job was nearly complete and the courthouse will be able to function with business as usual tomorrow.

The Graham County Attorney’s Office is usually off on Fridays, but since the power outage sent everyone home for the day an attorney will come in on his day off to handle the Graham County Superior Court hearings that were rescheduled from Thursday.