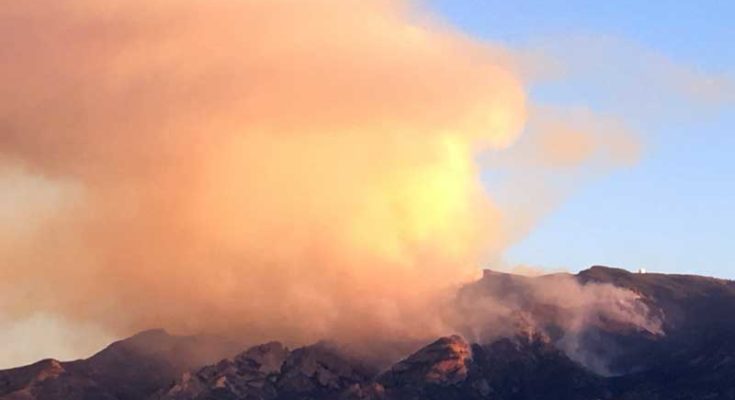 Jon Johnson File Photo/Gila Herald: Smoke rises from the Frye Fire on Mount Graham during the sunset in June 2017. The Safford Ranger District is warning of smoke being seen from the Galiuro Mountains to the west during a prescribed burn.

SAFFORD — Expect to see smoke from Mount Graham as the Safford Ranger District of the Coronado National Forest expects to conduct the Little Bull prescribed fire.

The project area consists of National Forest System lands in the southeastern portion of the Galiuro Mountains in southeastern Arizona and is included in the Coronado’s Galiuro FireScape Project.

The burn area boundaries lie between High Creek on the north and Ash Creek on the south and contain North and South Oak Creek drainages, including both wilderness and non-wilderness land in rugged terrain. Fire managers expect to complete burning while environmental and fuels conditions remain favorable for manageable fire activity.

Approximately 9,000 acres are planned for the project. Burning may continue for several days or may be intermittent, with ignitions occurring as fuel and weather conditions become suitable during February and March.

Fire has played an important ecological role in the history of the grassland and woodland ecosystems of southeastern Arizona. Regular intervals of naturally-occurring fire restricted growth of shrubs in grasslands, thinned forests of fire-intolerant trees, increased stream flows, and renewed wildlife habitat. A decrease in the frequency of natural fire has resulted in areas of dense, overgrown vegetation and the accumulation of fuel available for wildfires.

The Little Bull prescribed fire is designed to reduce the accumulation of hazardous fuels, improve range and watershed conditions, improve wildlife habitat, return the ecosystem to a more fire-resilient state, and reduce the likelihood of future high-intensity wildfires within the project area. By reducing the probability of extreme fire behavior during future wildland fires, the intent is to subsequently reduce threats to firefighter and public safety as well as reduce costs and natural resource damage due to fires.

Smoke will be visible periodically from Sulphur Springs Valley and Bonita, Willcox, Benson, San Manuel, Klondyke and surrounding areas for the duration of the project. Temporary road and trail closures will go into effect as prescribed fire activities progress. Closure orders will be posted appropriately.

For further information contact the Safford Ranger District Office at 928-428-4150 between 8 a.m. and 4:30 p.m. The office is closed weekends and federal holidays.