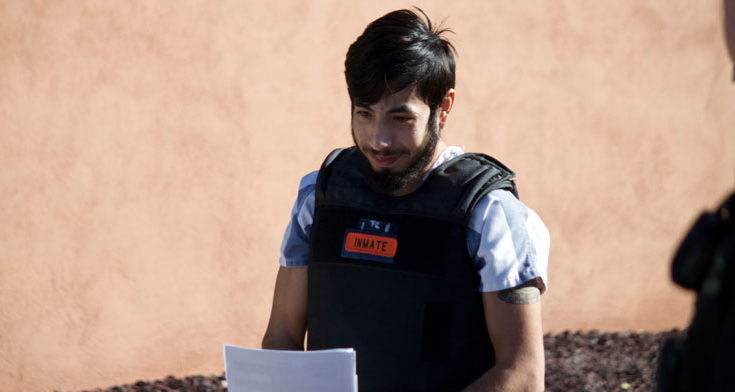 Jon Johnson Photo/Gila Herald: William Lance Marengo, 28, is led from the courthouse after pleading not guilty in the Thunderbird double homicide of Sabrena Martin and Ruben Nicholas Morales on Tuesday. Marengo is being held on a $5 million bond.

Marengo appeared with his defense attorney, Dennis McCarthy, and entered a plea of not guilty to charges of two counts of first-degree murder, two counts of aggravated assault with a deadly weapon, armed robbery, kidnapping, carrying a weapon in the commission of a felony crime, disorderly conduct with a deadly weapon, abandonment/concealment of a dead body, tampering/destroying evidence, and transportation of a narcotic drug for sale. Graham County Chief Deputy County Attorney L. Scott Bennett is prosecuting the case.

McCarthy previously waived a preliminary hearing in Safford Justice Court Precinct 1 on Wednesday, Dec. 11, which bound the proceedings over to Superior Court.

Marengo allegedly admitted to killing Sabrena Marie Martin, 22, of Safford, and Ruben Nicholas Morales, 36, of Salt Lake City, during a recorded interview with investigators. He reportedly committed the murders over a half-ounce of heroin and $100 in cash he took from the victims.

Martin and Morales both went missing in January. Their bodies were found Aug. 24 when they were exhumed from a shallow grave in Thunderbird Mobile Estates. An autopsy from the Pima County Office of the Medical Examiner later conclusively reported the cause of death for both victims to be via gunshot. (See: Man charged with two counts of first-degree murder in Thunderbird double homicide of Sabrena Martin and Ruben Morales – Gila Herald Nov. 27, 2019.)

Prosecutors allege Marengo shot and killed Martin and Morales in a residence they were living in with him in Thunderbird Mobile Estates at 7080 S. U.S. Highway 191 and then eventually buried the deceased couple in a makeshift cellar at the rear of the property. He is also accused of discarding evidence of the crime near the Gila River and trying to destroy it by burning. He also allegedly told investigators that he sold the murder weapon – a .22 caliber revolver – to a person in Tucson for $80.