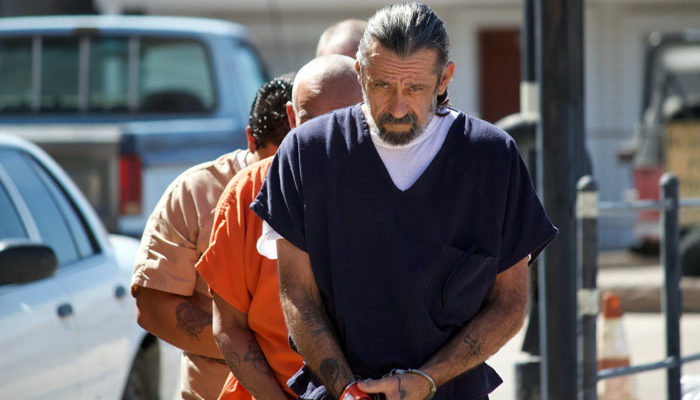 Jon Johnson Photo/Gila Herald: Travis Hancock makes his way to a court hearing. On Tuesday, he pleaded guilty to his charges and was sentenced to a total term of one year in custody followed by a four-year probation tail.

GRAHAM COUNTY – Travis Shane Hancock, 48, who drunkenly ran over Thomas Edward Reynolds, 46, while Reynolds was getting gas at Jo-Bi Convenience Market on June 2, will spend less than a year of incarceration.

At the time of his arrest, Hancock was already on probation for two separate incidents in which he pleaded guilty to assault in one and disorderly conduct and criminal damage/domestic violence in the other.

According to the sentencing structure, aggravated assault carries a presumptive sentence of 3.5 years in prison with a mitigated minimum sentence of two years. However, according to Hancock’s plea agreement, he was guaranteed probation and was sentenced to just four months in the Graham County Jail with credit for time served of roughly 3.5 months.

Hancock also received super mitigated terms for his other charges. The presumptive sentence for aggravated DUI is 2.5 years but probation was guaranteed, and Hancock was given a term of four months in the Arizona Department of Corrections, which will begin after his jail term ends. He was also given an additional four months for his possession of paraphernalia charge.

So, in total, he was given one year of incarceration, but he is eligible for one day off for every seven served. Factoring in that equation with his time already served, and Hancock should be released in April 2019. Upon his release, Hancock will have to serve a probation sentence of four years. If probation is violated for any reason, he could then be sentenced to multiple years in prison for his guilty plea.

Hancock was seen on video surveillance pulling up to the gas pump area at Jo-Bi’s where he spoke with Reynolds. Hancock then drove away as Reynolds retrieved a police baton and bear pepper spray from his truck. Reynolds is then seen on surveillance video walking toward Hancock’s truck. Hancock then drove at Reynolds and struck him with the driver’s side headlight area. Reynolds fell and his right leg was run over by the truck. Reynolds then stumbled back toward his vehicle on what was later deemed as two broken legs.

Hancock was soon apprehended and was found to be operating the truck under the influence of alcohol. He said Reynolds threatened to shoot him and then jumped in his way as he attempted to flee the scene.

Reynolds admitted to having a handgun in his truck but said he never retrieved it or threatened Hancock with the gun.

According to a Graham County Sheriff’s Office report, Hancock stated to a deputy that he believed Reynolds was a pedophile and that he was “glad he got the chance to smash Thomas with a truck.”