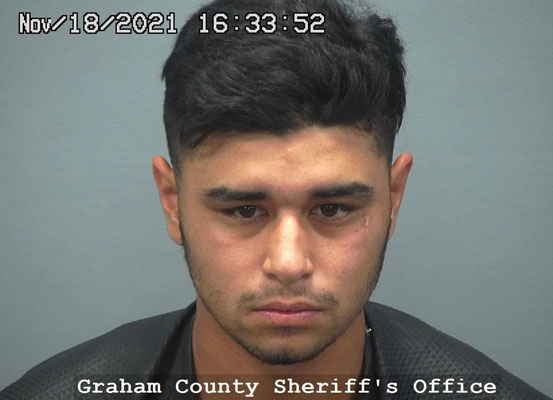 Contributed Photo/Courtesy GCSO: Jesus Duarte was booked into jail after allegedly brandishing and shooting a handgun.

THATCHER – A man who allegedly brandished a handgun and fired it once in the air during an altercation outside of a local bar has been charged.

Jesus Alfonzo Duarte, 22, of Thatcher has been charged with disorderly conduct with a weapon and two counts of aggravated assault with a deadly weapon. A warrant for Duarte’s arrest was issued Nov. 17 and his bond was set at $50,000.

The charges stem from an incident that took place the evening of Nov. 13 just before 9 p.m. According to a Thatcher Police report, Duarte was involved in an altercation outside of JD’s Corner Sports Bar & Grill at 2019 U.S. Highway 70 in which he brandished and fired a handgun.

According to one victim’s account, the victim’s girlfriend and another female were having a dispute outside in a group of other women when Duarte allegedly pulled out a handgun and pointed it at the victim. An acquaintance of the victim said he grabbed the gun and forced it up into the air and Duarte fired off a shot.

The victims said Duarte then began pointing the handgun at everyone in the group and then fled the scene with his wife and other women.

While Thatcher officers were getting statements from outside of the bar, other law enforcement from the Graham County Sheriff’s Office and Safford and Pima police departments reported they located Duarte at a residence in the area of Robinson Ranch Road and Rawley Drive.

Upon arrival, a deputy presented the Thatcher officer with five unfired .38 special rounds that were found in Duarte’s pocket. A later search of Duarte’s truck also produced 18 more unspent rounds of the same ammunition in a box. A .38 Special Taurus handgun with one spent shell casing and four cartridges was located in the back yard near where Duarte allegedly admitted to tossing it in an effort to hide the gun.

During interrogation, Duarte allegedly admitted to brandishing the handgun in an effort to separate the women from fighting and said he fired one shot into the air to do so. When asked if he pointed the gun at anyone there, Duarte allegedly replied yes and that he pointed it at “the two guys wearing cowboy hats.” He then later said the gun went off when the male grabbed it and that he didn’t mean for it to fire. He was later booked into the Graham County Adult Detention Facility.

Duarte, who is also reportedly waiting on being sentenced in a meth smuggling case in January, will next face a preliminary hearing in Pima Justice Court unless it is waived by his attorney.