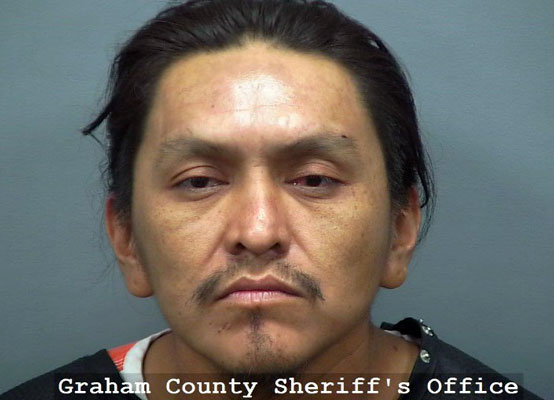 Contributed Photo/Courtesy GCSO: Herman Harvey was arrested and booked into jail on a warrant regarding charges of theft and possession of a dangerous drug and received a new charge of possession of drug paraphernalia after failing to escape an officer on July 6.

SAFFORD – A man wanted on drug and theft charges was apprehended the evening of July 6 after he apparently ran out of steam while fleeing from a Safford officer.

Herman Duane Harvey, 35, of Safford, had been wanted relating to charges of possession of a dangerous drug and theft since June 28. Harvey previously pleaded guilty during a change of plea hearing on June 9. However, the bench warrant was later issued roughly a week after the defendant’s pre-sentence report was given to the court.

On July 6 at about 9:11 p.m., a Safford officer spotted Harvey riding a bicycle westbound on U.S. Highway 70 after he exited the Economy Inn.

After confirming his warrant status, the officer attempted to make a traffic stop, however, Harvey rode away from the officer and went behind the Filbertos restaurant.

Harvey then ditched his bicycle and began running south on Gila Avenue. While still in his patrol vehicle, the officer quickly caught up to Harvey, who by then was attempting to enter The Plank restaurant. Harvey then doubled back and returned to the Economy Inn parking lot.

At that point, the officer exited his patrol vehicle and pursued Harvey on foot as the suspect ran back onto Gila Avenue.

The officer noted that Harvey appeared to have slowed down significantly from his physical exertion. The officer managed to catch up to Harvey and took him to the ground and into custody.

Once he was secured, the officer searched Harvey and retrieved drug paraphernalia, including tin foil with drug residue and a free plastic straw with burn marks on the ends. Tin foil and straws are commonly used to smoke illicit substances.

After Harvey was medically cleared from Mt. Graham Regional Medical Center due to some abrasions on his elbows and forehead from the takedown, he was booked into the Graham County Adult Detention Facility on his warrant and a charge of possession of drug paraphernalia.