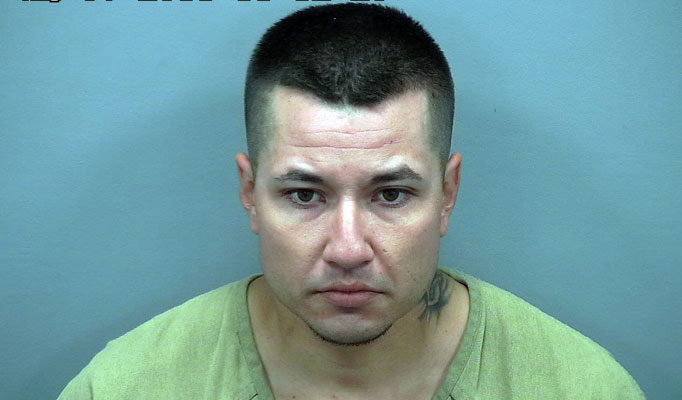 Contributed Photo/Courtesy GCSO: Rickey Chacon, 29, was arrested and booked into jail on a warrant regarding charges of aggravated assault and burglary after he was allegedly involved in a shoplifting incident at a Dollar General store.

SAFFORD – A wanted man was apprehended Wednesday, Aug. 11, after a woman he was with was suspected of shoplifting.

Rickey Chacon, 29, was arrested on a $5,000 cash bond warrant regarding failure to appear on charges of burglary and aggravated assault.

According to a Safford Police report, Graham County deputies were initially dispatched to the Dollar General store at 740 W. Roper Lake Rd. regarding a suspected shoplifting attempt. The suspects allegedly left the scene in a black Mazda.

Shortly thereafter, a deputy located the suspect’s vehicle on E. Solomon Road and performed a traffic stop. A Safford officer assisted in the stop and learned the driver was Chacon and that he had an active warrant.

Chacon allegedly told the officer that he had only entered the store to use the restroom and see what was taking his female companion so long. He denied any knowledge of a shoplifting attempt.

The woman allegedly told police that she had brought a wax melter to the store to find wax appropriate to use in the device. She said the Dollar Store staff accused her of stealing the melter and denied threatening to “stab” the employees. A “Glade” wax melter and two boxes of Glade wax inserts were located in the vehicle.

Chacon was then taken into custody and booked on his warrant into the Graham County Adult Detention Facility without further incident.