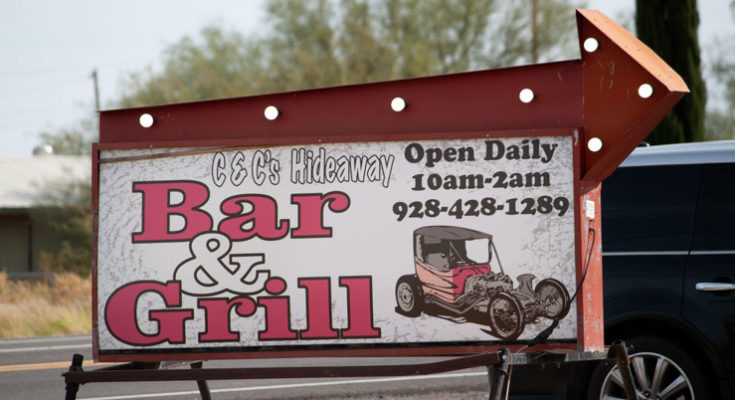 Jon Johnson File Photo/Gila Herald: An intoxicated man who brought his own whiskey into C&C’s Hideaway was hospitalized after receiving the losing end of a bar fight he reportedly started as he was being removed from the bar.

GRAHAM COUNTY – A man who brought his own whiskey to a bar with him was treated at Mt. Graham Regional Medical Center (MGRMC) after being knocked unconscious during a fight.

Edward Gadson Jr. was reported as the aggressor in the incident, in which he received more than he doled out to another bar patron at C&C’s Hideaway Bar & Grill early Tuesday morning.

A deputy was dispatched at about 12:39 a.m. to the bar at the intersection of U.S. Highway 191 and Highway 366 (Swift Trail) regarding a fight. Upon arrival, the deputy located Gadson on the floor of the bar being attended to by an off-duty healthcare worker.

Gadson had apparently walked into the bar shirtless and had brought his own bottle of Jim Beam whiskey and began drinking in the outdoor section of the bar. He was asked to leave by bar staff and on his way out started the fight, according to the Sheriff’s Office report.

Several witness accounts relayed to the investigating deputy that Gadson was the aggressor and struck the second party in his head/face area without provocation while the man was playing pool. The man then struck Gadson several times, and Gadson fell to the ground unconscious. The second party advised he didn’t wish to pursue assault charges against Gadson.

During the investigation, paramedics from Lifeline Ambulance arrived and transported Gadson to the hospital. Gadson reportedly was severely intoxicated and had blacked out and didn’t remember getting into a fight. While at the hospital, the deputy advised Gadson that the manager of the bar had trespassed him and that he was not allowed to return or he could be charged with trespassing if he did so.

A short while later, Gadson began yelling at the hospital staff and again said he didn’t know what happened or why he was at the hospital. The deputy informed him again and Gadson advised he wanted to press charges against the second man. Since Gadson was reportedly the aggressor, the deputy advised Gadson he would have to do so in civil court since the man appeared to act in self-defense.

Gadson reportedly suffered bruising inside his head but did not have any serious damage to his skull, according to a doctor’s report to the deputy.