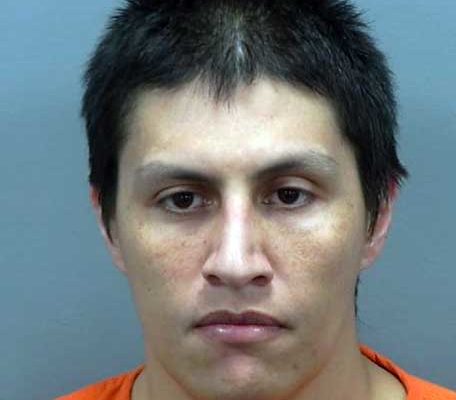 Contributed Photo/Courtesy GCSO: Jose Mendoza-Garcia was booked into the jail on drug and assault charges.

“I had to pull the straw from Jose’s mouth,” – investigating deputy.

GRAHAM COUNTY – Jose Aldo Mendoza-Garcia, 33, was arrested and booked into the Graham County Adult Detention Facility on May 16 for drug and assault charges after officers located him smoking heroin.

Deputies were dispatched to a residence on E. Emory Road for a welfare check after a man said his daughter had called him and the call was interrupted by arguing and yelling.

Upon arrival, deputies located a woman with red marks on her arms. She advised that her live-in boyfriend, Mendoza-Garcia, had caused the marks and that he was in a room down the hallway. She later said Mendoza-Garcia had slapped her around and punched her in her arms, causing the marks. The woman said she has lived with Mendoza-Garcia for 12 years and that they have two children together, ages 8 and 10, with another child on the way.

A second deputy was called to the room as Mendoza-Garcia continued to attempt to smoke the heroin as he was being placed under arrest.

A baggie containing black tar heroin was located in Mendoza-Garcia’s pocket when he was searched. Mendoza-Garcia later said he smokes heroin to deal with pain from a neck injury but denied having the heroin that was located in his pocket and said the tin foil wasn’t his because there wasn’t anything on it anymore.

Mendoza-Garcia was then booked into the jail on charges of possession of a narcotic drug, possession of drug paraphernalia, assault/domestic violence, false reporting to law enforcement, and tampering with evidence.