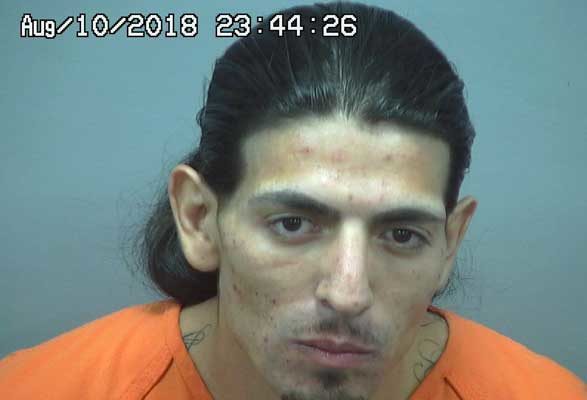 Contributed Photo/Courtesy GCSO: Andrew Herrera was booked into jail on a warrant after being found sedated from heroin use at the Safford Cemetery.

SAFFORD – A man who was recently released from prison after serving 7 years was found unconscious at the Safford Cemetery on Friday, Aug. 10, after allegedly injecting himself with heroin.

Andrew Rene Herrera, 28, was arrested and booked into the Graham County Jail on a warrant. Additional possible charges of possession of drug paraphernalia and possession of marijuana are pending.

Officers were dispatched to the cemetery at about 8:29 p.m. after a person observed Herrera passed out near a gravesite.

Upon arrival, they didn’t initially see Herrera but noticed a car in the vicinity. Inside, Herrera was in the driver’s seat and another male was in the front passenger seat, both were unconscious.

After not being roused by the officers’ lights the men awoke after the officers began loudly banging on the car. Both men had heavy scarring on their arms – commonly known as track marks – associated with intravenous drug use.

An officer located two hypodermic needles in Herrera’s pocket and another needle in the passenger’s door. A plastic baggie containing a spoon with apparent drug residue, used cotton balls and burn marks was located in the center console and a small plastic container with a marijuana was found in the driver’s side door panel.

Herrera claimed to be diabetic but wasn’t able to provide a prescription for insulin. Additionally, he said he didn’t have a medical marijuana card and that he had just gotten out of prison after 7 years and had relapsed into using heroin.

Herrera was then transported to the jail on his warrant and the passenger was released from the scene. The officer’s report was sent to the Safford City Attorney for review and charging.