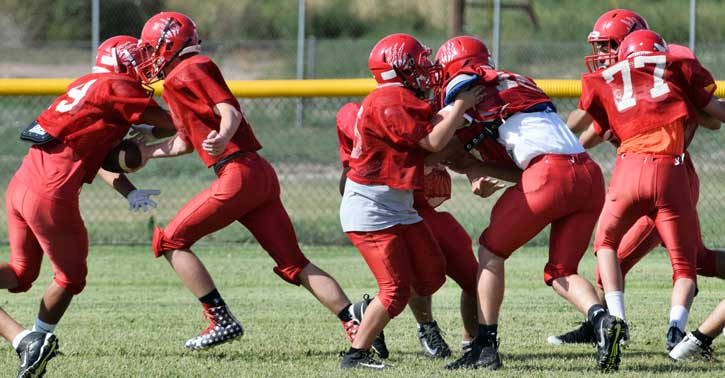 Photo By Raymundo Frasquillo: Duncan practices in anticipation for its opening game Friday night against the Ray Bearcats.

KEARNY – Duncan commences its 2018 football season Friday night at Kearny against the Ray Bearcats. It is the 16th season in the 8-man format and the first under long-time assistant coach Eric Bejarano.

Suiting up for Bejarano’s debut as the head coach are 14 student-athletes, 10 of whom return with varsity experience.

Back from a team that went 2-6 overall and 2-2 in the region for third place are seniors Wesley Conyer and Michael McGrath; juniors Lucas Basteen, Cesar Contreras, Cliff Hansen, and Christopher Smith; and sophomores Tommy Hille, Jason McGrath, Spencer Smith, and Aiden Wright.

Joey and Robert Bejarano plus Dan Coats round out the coaching staff.

The Wildkats hosted the Winkelman Hayden Lobos for a scrimmage on Aug. 10.

Joining Duncan in the 1A South Region are the Bowie / San Simon Cougars, the Elfrida Valley Union Blue Devils, the Fort Thomas Apaches, the Saint David Tigers, and the Sells Baboquivari Warriors.

Duncan will line up against the Fredonia Lynx in Northern Arizona University’s Walkup Skydome for the teams’ inaugural pairing on Aug. 24, hosts the Cougars on Aug. 31, visits the Salome Frogs on Sept. 7, the Tigers on Sept. 21, and the Apaches on Sept. 28, and hosts the Blue Devils on Oct. 5 and the Warriors on Oct. 12.

Duncan’s 2017 opponents were a combined 33-32 during the regular season and 4-5 in the post-season with five of the eight teams qualifying for the post-season. One ended as the state runner-up.

Duncan is 0-4 overall versus the Bearcats and 0-3 in Kearny during the same span.

“We’ll put all the parts together (by game time),” said Bejarano.