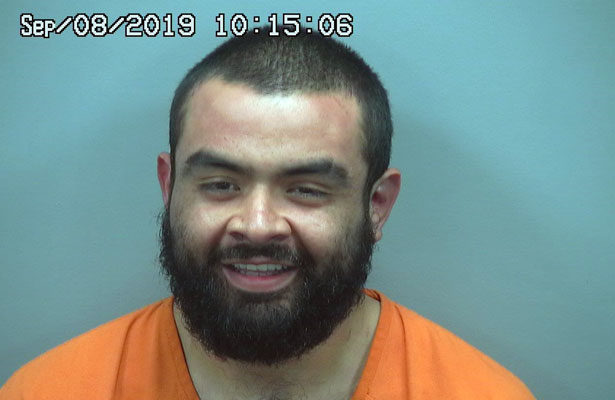 Contributed Photo/Courtesy GCSO: Daniel Montiel, 26, was booked into the jail on assault charges after drunkenly acting up at a children’s birthday party.

PIMA – Daniel Montiel, 26, of Pima, was arrested and booked into the Graham County Adult Detention Facility on Saturday, Sept. 7, after allegedly fighting with his family at a birthday party for young children.

According to a Pima Police report, officers were dispatched at about 9:38 p.m. to a residence in the 500 block of 400 West regarding a domestic incident.

Upon arrival, multiple witnesses at the scene described Daniel Montiel’s behavior at the party as being unacceptable, as he stomped on balloons and called the children inappropriate names.

When Daniel Montiel’s brother intervened, the suspect attacked him by tackling him and punching him. The suspect caught an elbow to his mouth during the attack, causing him to bleed, according to witnesses.

After that interaction, Daniel Montiel also acted aggressively toward his father and had to be restrained by another brother. The father later reported having suffered an injury during the encounter.

Officers at the scene reported that Daniel Montiel smelled of alcohol and appeared to be intoxicated. When they attempted to take him into custody, Daniel Montiel resisted and had to be physically forced into the patrol truck.

During transport to the jail, Daniel Montiel yelled and cursed at the officer and at one point spat blood and saliva onto the officer’s laptop computer, according to the police report.