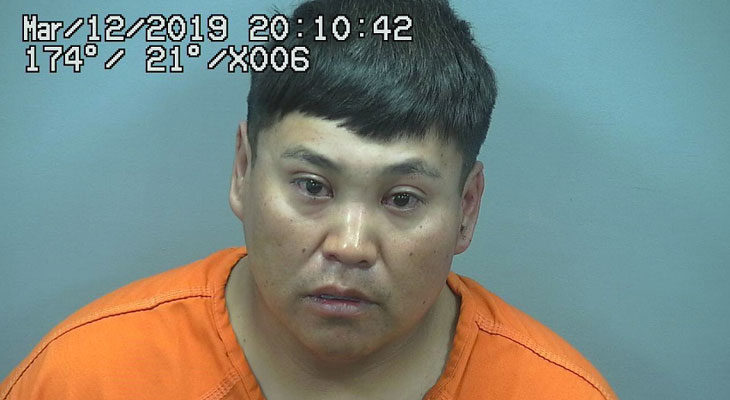 Contributed Photo/Courtesy GCSO: Steven Rope Jr., 25, was booked into the jail on charges of aggravated assault and kidnapping.

THATCHER – Steven Rope Jr., 25, was arrested and booked into the Graham County Adult Detention Facility on March 12 on charges of aggravated assault and kidnapping after allegedly striking his girlfriend and holding her against her will during a drunken tirade.

A Thatcher sergeant was initially dispatched to the Safford Police Department at about 12:19 p.m. regarding an alleged assault that took place in the 3900 of W. Main Street in Thatcher. According to the victim’s statements police, a friend had driven her to the Safford Police Department after the assault. The victim, who had obvious signs of being assaulted, was seen by paramedics from Lifeline Ambulance at the police department and was told she needed to go to the Mt. Graham Regional Medical Center (MGRMC) for treatment of a head injury.

Before being medically treated, the victim advised that she had been at work when her boyfriend, Rope, called her and was evidently drunk. She said she had a friend pick her up and she left work to go gather vehicle keys from Rope so he would not drive while intoxicated.

The victim said her friend dropped her off at her apartment and while the victim was in the bathroom changing out of her work clothes she was assaulted by Rope. She said he would not let her leave the bathroom and began by pushing her, which led to him punching her repeatedly, grabbing her hair and pounding her head on the tile floor multiple times, according to a Thatcher Police report.

The victim said she later managed to escape Rope’s grasp and immediately asked her friend to take her to the police department. Police records show Rope previously was arrested for a domestic assault against the same victim in July 2018.

After giving her statement, the victim was transported to MGRMC, where she was treated for her injuries.

Rope was later located at the apartment where the assault had allegedly taken place. After multiple attempts to avoid the sergeant and another officer, Rope was taken into custody. While being led to a patrol vehicle, Rope allegedly threatened a Thatcher detective and said he would get him and his family.

Rope was then booked into the jail on the above-listed charges and his demeanor ranged from making threats to crying. A portable breath test administered at the jail listed his breath/alcohol level at .240.