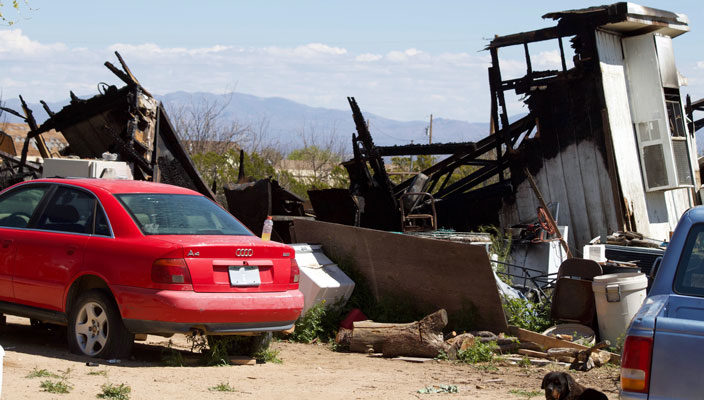 Jon Johnson Photo/Gila Herald: This double-wide manufactured home burned down to the ground Saturday morning but firefighters kept the blaze from spreading to nearby vehicles and other property. The dog in the foreground stayed through the whole ordeal.

GRAHAM COUNTY – A double-wide manufactured home burned down to the ground early Saturday morning. Due to the extensive damage, the cause of the fire is unknown and is still under investigation.

Safford Fire was dispatched to the residence on S. Cheyenne Drive at about 4:54 a.m. and discovered the residence fully engulfed while being surrounded by various other pieces of property, including multiple cars.

While the home was a total loss, firefighters kept the blaze to the single structure and there were no injuries to any persons occupying the residence or firefighters. However, three dogs were located deceased in the debris. According to Safford Fire Chief Clark Bingham, a fourth dog that wasn’t leashed stayed nearby during the entire operation and refused to leave. When the Gila Herald visited the site Monday morning, the same dog – along with another one that was leashed – was still on the property.

Safford Fire previously responded to another trailer fire on the same road in January, in which a dog was also found deceased in the rubble. (Gila Herald: Man loses dog in house fire – Jan. 28, 2019)

The Thatcher Fire Department assisted at the scene with water supply and manpower, and Safford firefighters had to return to the scene three times due to repeated flare-ups. In the end, the volunteer firefighters finally called it a day between 10:30 – 11 a.m., after being at the call for roughly six hours in total.

While the cause of the fire is still under investigation, Bingham said he believed it to likely be accidental.