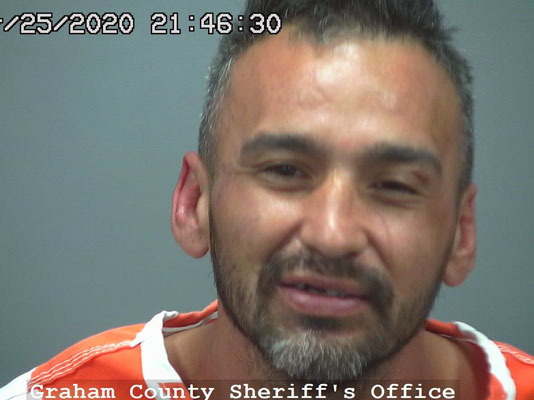 Contributed Photo/Courtesy GCSO: Bryan Medina, 36, was arrested and booked into the jail on charges of aggravated assault, criminal damage, threatening, and possession of an open bottle of alcohol in a motor vehicle.

GRAHAM COUNTY – Bryan Dennis Medina, 36, has been on law enforcement’s radar for the past couple of weeks and has had a number of encounters with officers from Thatcher and Safford as well as deputies with the Graham County Sheriff’s Office. On Saturday, Medina passed the limit of police courtesy and was jailed after allegedly throwing beer bottles at a juvenile, breaking a residence’s windows also with said beer bottles, and threatening to murder the occupants and their family members.

After a search, Medina was found in the San Jose area and was arrested and booked into the Graham County Adult Detention Facility on charges of aggravated assault, threatening, criminal damage, and possession of an open container of alcohol in a motor vehicle.

Medina was already on probation for threatening, disorderly conduct/fighting, and assault.

According to a Graham County Sheriff’s Office report, Medina went to a residence on Court Street in Solomon and threw a beer bottle at a 14-year-old resident. The youth said he dodged the bottle and Medina then threw another one through the window of the house.

Medina then allegedly called the homeowner – who was shopping at Walmart at the time – and threatened to kill her and her family.

A deputy photographed the broken window and Budweiser beer bottles at the scene and put out an attempt to locate for Medina, who was reportedly in his brown Chevy Monte Carlo sedan.

After not initially being able to locate Medina or his car, Medina’s mother called the authorities and said she had been following him in the San Jose area but had lost sight.

A deputy responded to the area and located a brown Monte Carlo. The car initially sped away from the deputy and turned onto a dirt farm road. The car stopped and its driver, an unknown male wearing a red shirt, took off on foot while Medina was apprehended in the passenger seat holding an open, unfinished Budweiser beer bottle. Numerous other beer bottles and cans were observed throughout the car.

Medina initially resisted being taken into custody but was placed into a patrol vehicle without much incident. The deputies then did a quick search for the driver but came up empty-handed.

While being transported to the jail, Medina allegedly threatened to kill the deputy and advised that he planned on sexually assaulting the deputy’s wife.

Once Medina arrived at the jail, he began to cough excessively and claimed to have COVID-19. The deputy reported Medina was verbally combative during the intake process and refused to take a breath/alcohol concentration test. He was then booked on his charges.