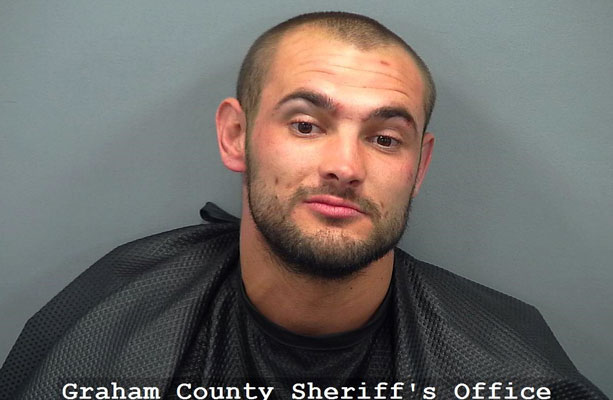 Contributed Photo/Courtesy GCSO: Frank Zipperer was booked on a warrant after being found drunk and disorderly in the street wearing only socks and underwear.

SAFFORD – An alleged intoxicated and belligerent man wearing nothing but underwear and socks while out in the street was arrested April 20 after authorities learned he had a misdemeanor warrant.

Frank Earl Zipperer, 25, of Safford, was arrested on a shoplifting warrant and was booked into the Graham County Adult Detention Facility.

Officers had been dispatched at about 7:52 p.m. to an address on W. 2nd Street regarding a fight in progress. Upon arrival, an officer located Zipperer in the roadway in nothing but his underwear and socks.

The officer requested Zipperer to go inside and not cause any more of a disturbance. The officer also advised Zipperer of his misdemeanor warrant and said that if he caused any more trouble he would be arrested.

The officer then left the scene and parked nearby. Shortly afterward, the officer reported hearing Zipperer outside yelling at his neighbors.

Zipperer was then placed under arrest for his warrant and was taken to Mt. Graham Regional Medical Center to be medically cleared due to his apparent high intoxication level. During transport to the hospital, Zipperer allegedly moved his hands from being handcuffed behind his back to the front and was banging on the officer’s cage in his patrol car. After threatening him with pepper spray, Zipperer calmed down, according to the report.

After being cleared from the hospital, Zipperer was transported to the jail and booked on his warrant.