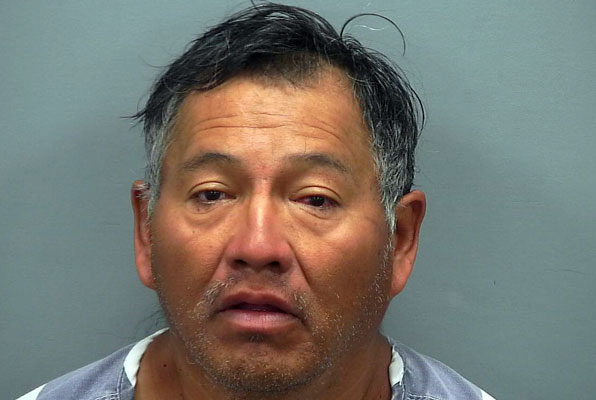 Contributed Photo/Courtesy GCSO: Travis Goseyun, 53, was booked into the jail on charges of aggravated assault and disorderly conduct/domestic violence.

SAFFORD – Her desperate cries for help permeated throughout numerous rooms of the Valley Motel at 1050 W. Thatcher Blvd. The victim, beaten so badly by her drunken boyfriend that she suffered two broken eye sockets, fractured cheekbones and blood clotting behind one eye, waited frantically for help to come.

An occupant in the adjoining room said he could hear a man yelling and a female screaming, “help me, call the police.” Yet he did nothing as the minutes of the beating dragged on, saying he didn’t want to get involved in the dispute.

A woman who was in the motel room during the beating said she tried to get in between the two parties to break it up, but said she didn’t call the police for assistance or medical services after the woman was severely bludgeoned.

According to a Safford Police report, the pair had been drinking whiskey throughout the day. A couple in another motel room heard the commotion and called for the police at about 7:25 p.m. on Saturday, May 25. By the time officers arrived, Goseyun had finished his attack and was sitting next to the victim, who was lying on the floor, bleeding from her face and ear over a puddle of vomit.

The witness who answered the door for the officer said she saw Goseyun striking the victim and shoving her head down into the floor.

The victim was initially taken to Mt. Graham Regional Medical Center (MGRMC), but, due to the severity of her facial injuries, she was then flown to a Tucson hospital for further treatment.

Goseyun, who was “highly intoxicated”, according to the police report, was also taken to MGRMC to be medically cleared for jail. Afterward, he was booked into the Graham County Adult Detention Facility on charges of aggravated assault and disorderly conduct/domestic violence.