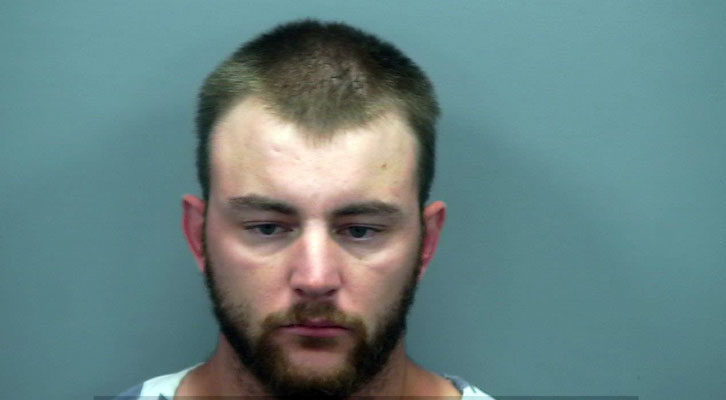 SAFFORD – Someone took his Captain Jack impression too far.

Dylan Weightman, 23, was booked into the Graham County Adult Detention Facility on Wednesday, Aug. 28, on charges of assault, disorderly conduct, and shoplifting, but his problems were not over.

An officer was initially dispatched at 4:17 a.m. to Walmart at 755 S. 20th Avenue regarding an intoxicated man fighting with a Walmart employee.

Upon arrival, the officer located a Walmart employee on the floor wrestling with a male subject, later identified as Weightman.

After Weightman was placed in handcuffs, the employee advised that he came upon the suspect in the toy aisle drinking a bottle of Malibu rum he had procured from the alcohol section of the store. The employee promptly took the bottle from Weightman and told him to leave the store or the employee would call the police.

At that time, Weightman allegedly removed another bottle of Malibu rum and began drinking it by the electronics section.

The employee attempted to retrieve that bottle as well, but Weightman didn’t give it up so easily and pushed the employee into a security guard.

According to the police report, Weightman attempted to punch the employees and a struggle ensued.

Due to his level of intoxication, Weightman was taken to Mt. Graham Regional Medical Center to be medically cleared to be booked into the jail. While at the hospital, Weightman allegedly was combative with hospital staff and made several comments regarding his desire to fight with the police officers. While at the hospital, a Safford officer and a Graham County Sheriff’s Office deputy had to restrain Weightman to a bed for the safety of the hospital staff, according to a Safford Police report.

After being cleared at the hospital, Weightman was transported to the jail and booked, but that was not the end of his night.

Upon doing so, Weightman allegedly began to tussle with the three detention officers. A sergeant was called to assist, but Weightman continued to resist and the sergeant deployed her TASER into his ribs.

By then, the Safford officer – who was still filling out paperwork – had heard the commotion and went to assist as well. As Weightman attempted to punch the sergeant and other detention officers, the Safford officer retaliated by punching Weightman in his face twice while ordering him to stop fighting and resisting the officers. Weightman was then taken into control and was placed in a restraint chair.

Later that day, officers were informed of surveillance footage from Tuttie’s American Club bar on Main Street in Downtown Safford from the previous night. The footage shows Weightman attempting to break into the closed bar by prying open the security door. However, Weightman was unsuccessful in kicking open the main door and then, presumably, made his way to Walmart and an easier target.

Weightman appeared in front of Gila Valley Consolidated Court Judge Ned Rhodes for his arraignment Thursday, Aug. 30. A pretrial conference was then set for Sept. 12.