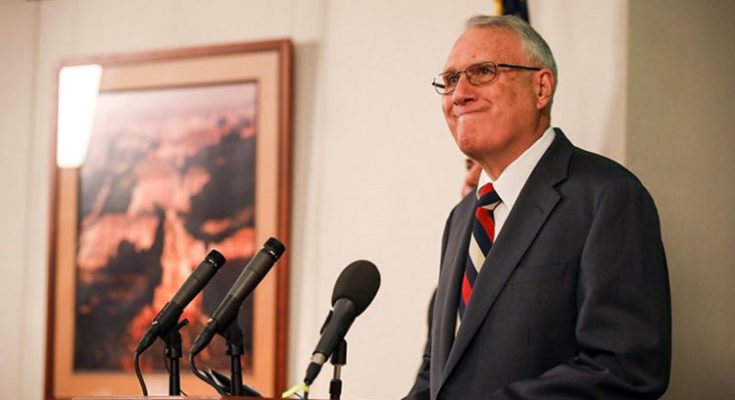 “There is no one in Arizona more prepared to represent our state in the U.S. Senate than Jon Kyl,” Ducey said Tuesday. “He understands how the Senate functions and will make an immediate and positive impact benefiting all Arizonans.”

There is no one in #Arizona with the stature of Senator Jon Kyl. With nearly two decades of experience in the Senate — serving alongside John McCain — Senator Kyl is prepared to hit the ground running. #KylforAZ #KavanaughConfirmation https://t.co/Zb9B8snUxY

Kyl will come out of retirement to serve at least through the end of the year.

At the news conference, Ducey said Kyl represented Arizona in the U.S. Senate from 1995 through January 3, 2013. He had served as minority whip, the second-highest ranking position in the Republican conference and served in the House of Representatives from 1987 through 1995.

I am deeply grateful to Senator Kyl for agreeing to succeed his friend and colleague of so many years. Every single day that Jon Kyl represents #Arizona in the U.S. Senate is a day our state is well-served. #KylforAZ #KavanaughConfirmation https://t.co/e6zHvEOk5O

McCain died in August after a yearlong battle with brain cancer. Under Arizona law, if a vacancy occurs in one of the state’s two Senate seats, the governor is required to name a replacement of the same party as the departed senator.

This is the first time in Arizona’s history that a Senate seat has been filled by the governor, according to a list on the Senate’s web page.