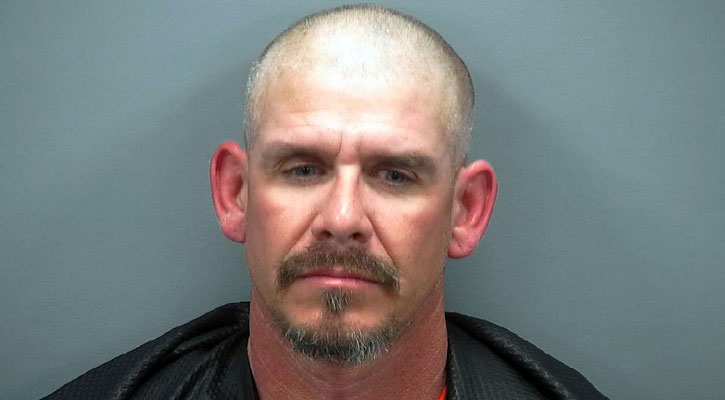 Contributed Photo/Courtesy GCSO: Carlos Lujan, 43, was arrested and booked into the Graham County jail after he allegedly attempted to hide a baggie of meth in his mouth.

SAFFORD – A Greenlee County man gave a new definition to the term “meth mouth” when he reportedly attempted to conceal a baggie of methamphetamine by shoving it in his mouth during a traffic stop.

The incident occurred at about 4:10 a.m. on Sept. 4 when a Safford officer noticed a vehicle swerving while traveling westbound on U.S. Highway 70. The officer then measured the vehicle’s speed on his radar to be 22 mph in a 35-mph zone.

Suspecting the driver was impaired, the officer initiated a traffic stop. Upon contact, the officer reported smelling a moderate odor of an alcoholic beverage.

While one officer was questioning the driver, identified as Derrick Ronald Scott, a second officer noticed the passenger, identified as Carlos Lujan, 43, “rapidly toss” something into his mouth. The officer ordered Lujan to open his mouth and Lujan spat out a small plastic baggie containing methamphetamine.

Lujan, who also appeared intoxicated, was arrested on an unrelated warrant and for possession of a dangerous drug and was booked into the Graham County Adult Detention Facility.

Scott failed a field sobriety test and was arrested for DUI. A blood sample was taken from Scott and afterward he was released pending lab test analysis and review by the Graham County Attorney’s Office. Scott allegedly admitted that the pair had driven to Safford from Clifton and had spent time drinking out at the duck ponds in the Graham County Fairgrounds.

An impound inventory was made of the vehicle, and officers located several open containers, including half a bottle of Crown Royal liquor, a quarter-bottle of whiskey, and a 24-pack of beer with at least one open. The truck was then towed from the scene.