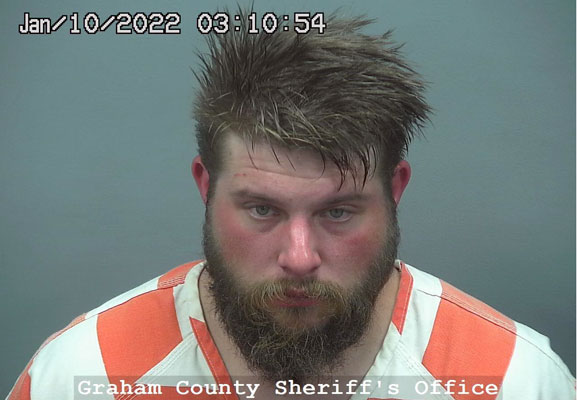 GRAHAM COUNTY – Alleged poor driving led to the arrest of a Solomon man on drug and weapons charges Sunday night.

Edward Williams Oller, 26, was booked into the Graham County Adult Detention Facility on charges of aggravated DUI, possession of a narcotic drug (cocaine), possession of a dangerous drug (methamphetamine), and two counts of misconduct involving weapons.

According to a Graham County Sheriff’s Office report, a deputy was eastbound on U.S. Highway 70 near the Safford Ranch area at about 10:40 p.m. when he encountered Oller in a Ford F-250. The deputy reported Oller crossed the centerline of travel by “half a vehicle width” multiple times and came close to striking another eastbound vehicle that was making a right turn.

The deputy conducted a traffic stop on the truck and noted that the driver, Oller, appeared to show signs of being under the influence of some type of drug.

After undergoing field sobriety tests, the deputy determined Oller was too impaired to drive and arrested him for DUI. Since Oller’s driver’s license is suspended, the charge was automatically upgraded to aggravated DUI.

During an ensuing tow inventory search of the vehicle, authorities located a Ruger .357 caliber handgun with six rounds loaded. The search also yielded a plastic baggie with methamphetamine, a usable amount of cocaine found in a folded-up dollar bill, and various pieces of drug paraphernalia. Oller denied knowledge of the drugs and drug paraphernalia.

Oller also refused to consent to a blood draw for testing purposes, however, a warrant was approved a and a sample was taken. He was then booked into jail.