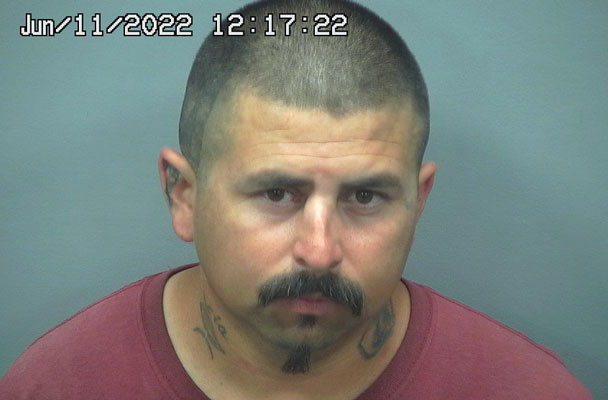 Contributed Photo/Courtesy GCSO: Gerardo Garcia was booked into jail on charges of theft of means of transportation, unlawful flight from law enforcement, and DUI.

Suspect says he thought it was his cousin’s truck

SAFFORD – Police say a man they suspect of stealing a truck and unlawfully fleeing from them did so while under the influence of alcohol.

Gerardo Victor Garcia, 35, of Safford, was arrested on June 11 and booked into the Graham County Adult Detention Facility on charges of theft of means of transportation, unlawful flight from pursuing law enforcement, and DUI.

According to a Safford Police report, an officer was initially dispatched at about 8:21 a.m. regarding the theft of a 2007 Chevy utility truck. The victim said he saw a man in the alley behind the address he was working and when he went inside he heard his truck start. The victim said he gave chase but the truck drove away.

Shortly afterward the report, an Arizona Department of Public Safety Trooper located the truck in the 3000 block of 8th Avenue. After confirming the vehicle was the one stolen, the trooper initiated a traffic stop but the truck failed to yield to his lights and siren. Instead, the truck sped up on Discovery Park Boulevard until it reached the Safford Cemetery, where the truck pulled over at the north end of the complex.

The driver was identified as Garcia, and he showed multiple signs of impairment from alcohol, according to the report.

After failing field sobriety tests, Garcia was transported to the Safford Police Department, where a blood sample was collected. He was then booked into jail.

The victim retrieved the truck from the cemetery and said it appeared to be in the same condition he left it.