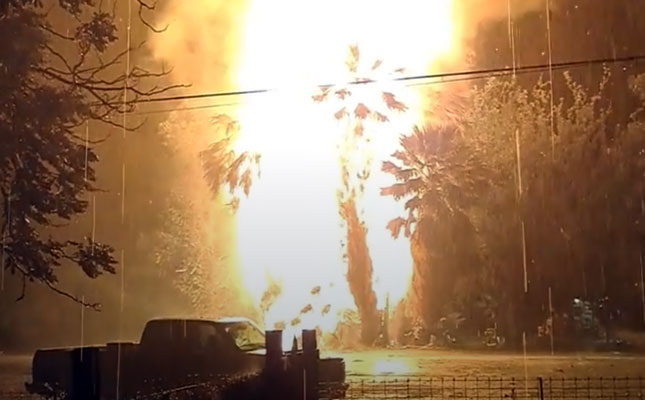 Photo By Edilia Crockett: Palm trees on Main Street in Pima catch fire after being struck by lightning.

PIMA – Just as the heart of a storm cell was pummeling Pima early Sunday morning, the Pima Volunteer Fire Department was called to duty.

For those not awake in the late evening or early morning hours, it was a serious light show of lightning as the storm made its way westward from the York area, into Solomon and Safford. The cloud group then met up with another cloud group that had descended north into Pima from Mount Graham and together they mixed with a loud bang and assorted showers.

From that, a lightning bolt struck a grove of palm trees in the 200 North block of Main Street at around 1 a.m. and caught them on fire.

The Pima Fire Department rolled two trucks to the scene as the rain continued to fall. The precipitation didn’t last for long, however, and as the rain stopped the fire continued to breathe.

Firefighters attacked the blaze and extinguished it with no damage to the property’s residence except for a cable or telephone wire that had burned, according to Pima Fire Chief Scott Howell. The entire time at the scene was roughly 45 minutes. While it was quite an impressive lightning show, the palm tree fire was the only call out for the Pima Fire Department for that time period.