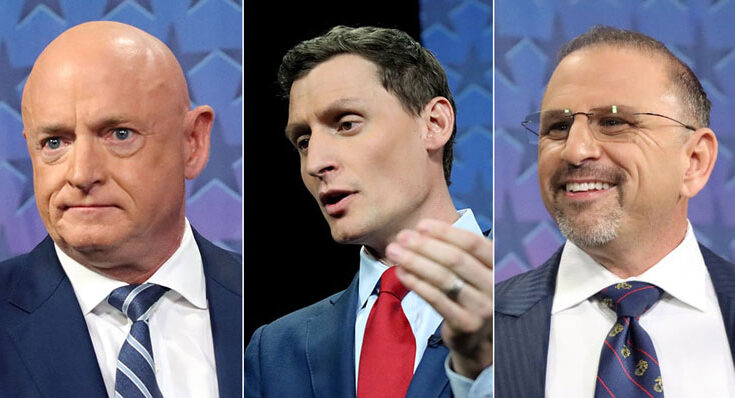 Photo by Alexia Faith/Cronkite News: With just a week until the election, Libertarian Senate nominee Marc Victor, right, pulled out of the race on Tuesday and endorsed GOP nominee Blake Masters, center, in his bid to unseat Arizona Sen. Mark Kelly, a Democrat. The race, one of the most closely watched in the nation, was already narrowing before Victor’s announcement.

Political experts say the endorsement may give Masters a bump, but will not guarantee a win against incumbent Democratic Sen. Mark Kelly in one of the country’s most expensive, closely watched races, which could be key to determining which party controls the Senate.

“It is certainly good news for Masters,” said Jessica Taylor, Senate and governors editor for the Cook Political Report. “I think Democrats were hoping, certainly, that Victor would pull as much as 4% or so.”

But she and another analyst said there’s no guarantee Victor’s followers will support Masters, adding that the Libertarian will still be on the ballot. And his endorsement comes after more than 1 million early Arizona ballots have already been returned, according to Uplift Campaigns, a Democratic campaign media group.

The endorsement follows Victor’s concession last month that he could not win, and his offer to withdraw and throw his support to either Masters or Kelly if they would meet for a frank exchange of ideas.

He said Tuesday that Kelly never took him up on the offer and “Blake Masters waited until” Monday, but that was enough for him to make up his mind. He announced his endorsement Tuesday in a YouTube video.

“I wasn’t planning on making a decision about endorsing you in this video but you’ve won me over man,” Victor said in the video of his conversation with Masters. “I feel a lot better about you now having this short conversation with you.”

A spokesperson for Kelly’s campaign downplayed the importance of Victor’s endorsement.

“With just one week to Election Day and nearly a million ballots already cast, Senator Kelly is proud of the broad coalition of Republicans, Democrats, and independents who have come out in support of his re-election campaign,” spokesperson Sarah Guggenheimer said in an emailed statement.

But Masters, in a prepared statement released by his campaign, welcomed the endorsement as another part of its “broad coalition to defeat the worst senator in America.”

“Marc Victor joins a growing list of Arizonans from across the political spectrum who are fed up with open borders, big government corruption, and rising crime,” the statement said.

In the 20-minute interview, Victor and Masters bond over a jovial conversation that touched on everything from the Federalist Papers to anarcho-capitalist Murray Rothbard to classical liberal Ludwig von Mises.

Victor said in a phone interview later that while he expected to agree on economic issues, he was surprised at Masters’ stances on social issues.

“He was able to say … ‘I’m personally against it but,’ and I’m paraphrasing here, ‘I don’t want to impose my personal views on other people through the law,’” Victor said. “That’s a very, very important point.”

Victor said Masters’ stance on keeping government out of social issues is at the heart of his own “live and let live” philosophy. He also appreciated Masters’ willingness to sit down and have a conversation.

“Blake is in a very tight race here with Mark Kelly and I want to see him win,” Victor said.

But analysts say it is not clear how much impact the endorsement will have. Victor polls in low single digits in a range of polls, 6% being the most in just one survey of likely voters.

Taylor said that third-party candidates usually perform better in polls than they on Election Day and that “more mainstream Republicans” may still vote for Victor as a “protest vote” against Masters, who has been endorsed by former President Donald Trump.

Kyle Kondik, a managing editor of Sabato’s Crystal Ball at the University of Virginia’s Center for Politics, said a “significant chunk” of Arizona’s ballots have already been cast, and Victor’s announcement comes too late to change those votes. It also comes too late to get his name off the ballot for voters who wait until Election Day to vote.

But Victor said he is confident that he did what is best for his “live and let live” philosophy.

“You can’t tell what’s in their hearts or in their minds from these little 30-second commercials beating each other up,” Victor said of the value of a one-on-one with his former competitors.

Even though he has endorsed Masters, he said there still is a “standing offer to come talk to Mark Kelly.”

“He hasn’t taken me up on anything. I’d love to see how he ticks through some of these questions,” he said of Kelly in the video with Masters. “But Blake, I feel good about you.”