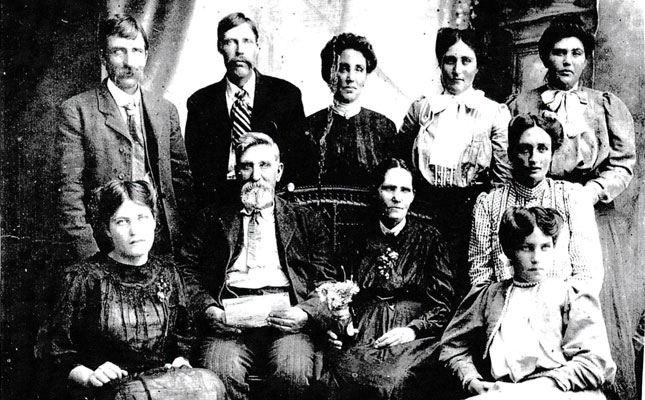 At a young age, L.T. moved with his family to Utah, settling in Payson where he attended the local school during the winter term. While living there, he met and later married Delia Elizabeth Curtis, daughter of Moses and Aurelia Jackman Curtis on July 5, 1870. Delia had been born 30 Oct. 1852 in Provo, Utah; the family later relocating to Salem. After a few years of helping build up the Salem area, L.T. and Delia were called to settle on the Little Colorado in Arizona.

They arrived at Brigham City, Arizona in December 1877 and helped build up that new community by living in the United Order and farming the land. When the order was disbanded three years later, the family moved to Savoia, New Mexico, where L. T. worked at splitting rails for the railroad. In October 1882, the family relocated to Curtis, where they joined Delia’s parents.

The Curtis Stockade was home for a short time before moving about two miles northwest of the present town of Eden, homesteading 160 acres. The community was called Coonsville after the family. The Coons family was joined by other families and by 1898 the following families were listed as living in the boundary of Coonsville near them: William Ballard, Joseph Ballard, Ezra Coons, Francis Coons, William F. Butler, William Wesley Colvin, Joseph S. Fockrell, Thomas R. Hamblin, Alva S. Porter, Charles Smithson, James Webb, Felix McEuen, Lorenzo Thatcher and a Mr. Winsor.

The people in Coonsville were members of the Curtis Ward and attended school at Curtis (now Eden); first in the old log church and later in the adobe building. In the fall of 1897, Graham County established the Coonsville School District #28, also known as the Coons School District.

The Iiving room of the Coons home was the setting of the first school class of 1897 with AIva S. Porter as a teacher. In 1898, Miss Frankie Middleton was the teacher in the same location. In 1899, the school was moved to a small one-room Iumber building near the Coons’ home. A wood-burning heater set in the center of the room in a sandbox. Rows of crude wooden seats with small tables were on each side of the room. About 1900 a new school was built north of the Coons’ home. It was made of I x 12’s with a batting ceiling covered with factory material. This was also known as an o’rag ceiling”.

After the Gila River floods washed away much of their small farm, Lebbeus and Delia relocated to Curtis Flats near St. David, where their sons’ families were living. After Delia’s passing in November 1907, L.T. made his home with family members in Pomerene for the next 28 years, leaving this life in October 1935. They both rest in the St. David Cemetery.

This hardy couple became the parents of 10 children, with 8 living to maturity:

The posterity of this early family is numerous and many still reside in the Gila Valley as well as the Pomerene-St. David area. This and other family histories may be found at the Eastern Arizona Museum in person, Thursday-Saturday 10 a.m. – 3 p.m.