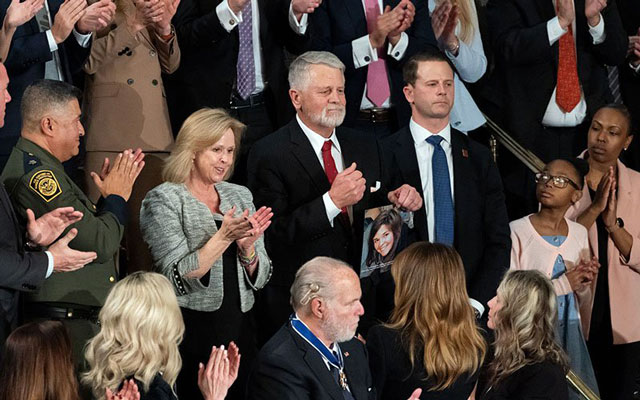 Photo By Andrea Hanks/The White House: Marsha and Carl Mueller, who were critical of the Obama administration’s handling of negotiations with their daughter’s kidnappers, were guests for President Donald Trump’s 2020 State of the Union address. The Prescott couple held a photo of Kayla Jean during the speech.

WASHINGTON D.C. – Kayla Jean Mueller’s parents told a federal judge Friday that “there’s not a day, barely an hour” when they don’t think of their daughter, who was kidnapped in Syria and held hostage by ISIS for 18 months before being killed in 2015.

Carl and Marsha Mueller of Prescott were among the dozens of survivors who spoke at the sentencing of Alexanda Amon Kotey, one of the ISIS fighters convicted in connection with the deaths of four U.S. hostages, including Kayla.

“You chose a young woman whose life was dedicated to helping people. She would have helped hundreds, maybe thousands of people during her lifetime,” Carl Mueller said. “You took her away from the world, as well as us.”

His comments were part of almost two hours’ worth of victim impact statements Friday during Kotey’s sentencing in U.S. District Court for the Eastern District of Virginia.

Kotey, who prosecutors said also participated in the taking of European hostages who were later killed, received a mandatory life sentence. After at least 15 years in prison here, Kotey’s plea agreement calls for him to be transferred to the United Kingdom where he would be sentenced to life without chance of parole in five murders and seven hostage-takings.

Kotey pleaded guilty to a total of eight U.S. counts, including four counts of hostage-taking resulting in death, conspiracy, and providing material to support terrorists.

In 2012, the British-born Kotey joined ISIS, the Islamic State group that seized large parts of Iraq and Syria and declared an Islamic caliphate. According to court documents, he and other British citizens – El Shafee Elsheikh and Mohamed Emwazi – were in charge of hostages for the militant organization, which included “physical and psychological violence” against them, ransom negotiations, and, ultimately, murders.

Kayla Mueller was in Turkey in 2013, working to provide humanitarian aid to local villages, when she accompanied another aid worker on what was supposed to be a quick trip into Aleppo, Syria. But as they headed back toward Turkey, Mueller was captured and taken hostage by ISIS.

She was held for 18 months, during which she had her head shaved, was held in solitary confinement, and raped numerous times, according to news reports. During that time, her captors contacted the U.S. government and the Muellers demanding the release of an ISIS prisoner or the payment of 5 million euros.

The U.S. government generally refuses to negotiate with hostage-takers, fearing that could encourage others to take hostages, but the Muellers have long insisted that the government did not do enough to help their daughter – a point echoed Friday by Carl Mueller.

It is not clear how Mueller died, only that her family received confirmation of her death in February 2015. But court documents say she was killed after the ransom on her was not paid.

The deaths of other hostages – James Foley, Peter Kassig, and Steven Sotloff – were captured in grisly videos in which they were beheaded over a series of weeks, with their killers demanding ransom.

The Muellers were joined at Kotey’s sentencing Friday by many of the other victims’ family members, including those European hostages included in the charges against Kotey in the United Kingdom.

Many could be heard struggling to hold back tears in the audio of their victim impact statements. While some spoke of forgiveness, others lashed out at Kotey for his “exercise of cruelty.”

The Muellers spent much of their time focusing on their daughter’s compassion and the desire to help others that led her to the Middle East in the first place. Marsha Mueller said their “hearts and lives were shattered into pieces” by Kayla’s death.

“We miss our beautiful daughter Kayla, full of love and life,” Marsha Mueller said, struggling to read her statement. “I hope she knows how proud we are of her, for her God-given gift to help all those put in her path.”

Kotey declined an opportunity to speak on his own behalf after family members spoke. While Carl Mueller said he cannot forgive Kotey, he said the resolution of the case has been a step in the right direction.

“Witnessing this has restored my faith in my government,” he said to District Judge T.S. Ellis III, “and I appreciate that.”